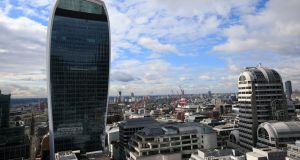 The Walkie-Talkie, designed by Rafael Viñoly, was completed in 2014. Photograph: PA

London’s landmark “Walkie-Talkie” skyscraper has been sold for £1.3 billion (€1.5 billion) to Hong Kong investors in a record-breaking transaction for a single building in the UK.

The building at 20 Fenchurch Street has been bought by Lee Kum Kee, a sauces and condiments group best known for its oyster sauce, the vendors said on Thursday.

It becomes the latest trophy London building to be snapped up by capital from China and Hong Kong.

Landsec, the UK real estate investment trust that owns 50 per cent of the building, said it had exchanged contracts with LKK Health Products Group Limited, a division of the broader Lee Kum Kee Group, which would also buy the remaining 50 per cent stake controlled by Canary Wharf Group.

The sale follows that of the “Cheesegrater” skyscraper, or Leadenhall Building, which was sold to another Chinese group, CC Land, in May for £1.15 billion.

It comes as a wave of Chinese capital floods into London real estate, pushing prices to record highs. Chinese property developers have been investing heavily, along with more unlikely buyers such as Lee Kum Kee, which bought a £37 million Docklands building in 2016 and earlier this year approached the owners of the “Gherkin” skyscraper about a potential sale.

Canary Wharf Group had been marketing its share of the 20 Fenchurch Street, of which it had syndicated shares to Morgan Stanley, the Qatar Investment Authority and China Investment Corporation.

Rob Noel, chief executive of Landsec - formerly known as Land Securities - said the listed group had been persuaded to sell its own share by the price on offer. “We weren’t in a position where we wanted to sell assets, but no asset is sacrosanct and this is a price at which we have to sell it.”

Mr Noel added: “This is a shining example of our development programme. We started it in 2010 and people asked ‘what on earth are you doing’ - now it’s sold at a record pricing.”

Chinese investors bought £2.3 billion of City office buildings in the first half of this year, more than 40 per cent of all transactions in the City’s Square Mile, along with £1.2 billion of West End property, according to Cushman & Wakefield, which advised Lee Kum Kee.

Hong Kong-based Lee Kum Kee, which dates back to 1888 and says its founder invented oyster sauce, is a private family-run group chaired by Lee Man Tat, whose wealth is estimated at $2.5 billion (€2.1 billion), according to Forbes.

The Walkie-Talkie, designed by Rafael Viñoly, was completed in 2014 with 671,000 sq ft of office space on 34 floors in the insurance district of the City. It is one of the financial district’s most recognisable buildings, although its design divides opinion. It also became notorious in 2013 when sunlight, reflected from its concave windows, scorched pedestrians and damaged parked cars including a nearby Jaguar.