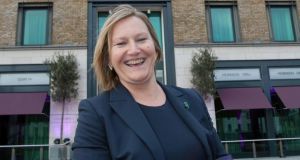 Igal
Ahouvi
Igal Ahouvi is an Israeli-born private investor and has bought a number of retail properties around Ireland in recent years.

His property portfolio includes two Aldi stores in Dublin and the Sketchers shoe shop on Henry Street in Dublin.

He also pre-funded a new Tesco store in Roscrea, Co Tipperary before it opened in 2011.

The Igal Ahouvi Group acquired 47 Marriott hotels in a deal led by Quinlan Private, which was founded by Irish investor Derek Quinlan, in 2007 for about £1.1 billion. The portfolio went into receivership and was repossessed by Royal Bank of Scotland in 2011 and may be bought by the Abu Dhabi Investment Authority.

Parma Group is the holding company for the non agri-business interests of the Larry Goodman family.

No value was put on the deal, though the building is understood to have sold for between €30 and€35 million.

It was previously sold in 2006 for €212 million to a consortium led by Derek Quinlan of Quinlan Private, developer Paddy Shovlin and hotelier brothers Anthony and Patrick Fitzpatrick.

Elena
Baturina
Elena Baturina is a Russian businesswoman, with an estimated net worth of $1.1 billion (€838 million).

Ms Baturina owns the Austrian company, Beneco Privatstiftung, which purchased the Morrison hotel on Ormond Quay for €22 million from Nama in 2012.

The billionaire is reportedly on the lookout for further luxury hotels in Ireland.

Her husband is the former Moscow mayor Yury Luzhkov – he left office in 2010 following disagreements with Russian president Dmitry Medvedev.

The office block is occupied by law firm Eugene F Collins and was previously owned in a personal capacity by Treasury Holdings developer, Johnny Ronan.

It was sold for €13.3 million in February 2013 after going on the market four months earlier.

Bernie Gallagher is the daughter of hotelier PV Doyle, who set up the Doyle Hotel Group.

The couple made millions with the sale of hotels to a consortium of investors including Bernard McNamara, Derek Quinlan and Sean Dunne during the Celtic tiger-era property boom.