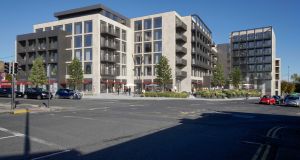 A computer-generated image of the apartments that have been approved for the Stillorgan Leisureplex site.

Kennedy Wilson has secured the green light from An Bord Pleanála for the construction of 232 luxury apartments in blocks of up to eight storeys on the site of the Leisureplex bowling alley in Stillorgan.

While the height of the development contravenes the south Dublin village’s local area plan (LAP), the US-headquartered real estate firm argued in its fast-track planning application that another developer, Cairn Homes, has already secured permission to build student accommodation blocks of up to eight storeys on the adjacent Blakes restaurant site.

Kennedy Wilson also maintained that its proposal for the Leisureplex site would be consistent with certain objectives of Stillorgan’s local area plan which state that, in “exceptional circumstances”, taller building heights may be allowed in district centres.

The developer had sought to build as high as nine storeys on the site in its initial pre-planning submission to the board last February . That proposal was rejected, however, with the planners suggesting that it required “further consideration and amendment” along with other issues before a fast-track application could be submitted.

In addition to the residential element of the Leisureplex scheme, Kennedy Wilson intends to deliver four restaurants and cafes, and two retail units on the site. The apartments will cater for the upper end of the rental market, with proposals for a concierge service, cinema, gym, along with a residents’ lounge, co-working space, dining area, communal kitchen and rooftop terrace. The Leisureplex bowling alley – or Stillorgan Bowl as it was known originally – is facing closure and demolition as part of the plan.

Kennedy Wilson bought the 2.5-acre site for € 15 million in 2016. While that price represented a premium of 50 per cent on the € 10 million agent Sherry FitzGerald had been guiding when it brought it to the market, it was a fraction of the €65 million Johnny Ronan and Richard Barrett’s Treasury Holdings paid to acquire it in 2006.

While Treasury engaged in consultations with the local community, with a view to devising a masterplan for the bowling alley site along with Stillorgan shopping centre, which it also owned, its ambitions were brought to an abrupt halt by the economic crash.

Prior to the developer’s acquisition of the site, the Leisureplex’s owners, brothers Ciarán and Colum Butler, had their own plan for the lands refused by An Bord Pleanála. The Butlers had wanted to build 314 apartments, a library, commercial and retail space, and a new leisure building and gym in 15 blocks.