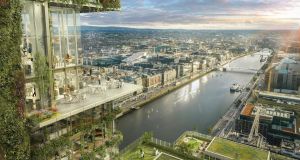 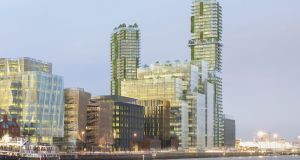 Developer Johnny Ronan has taken the latest step towards fulfilling his ambition of delivering Dublin’s tallest building with an application to An Bord Pleanála to build a 45-storey residential tower.

As part of its application, which it submitted on Wednesday under the Government’s Strategic Housing Development (SHD) or “fast-track” planning process, RGRE has sought permission to develop a total of 1,005 apartments distributed across three blocks ranging in height from eight to 45 storeys over a triple-level basement.

At 155m, the tallest of the scheme’s three blocks would be Dublin’s tallest building, dwarfing both Liberty Hall (59.4m) and the 88m (23-storey) tower on Tara Street for which RGRE secured planning permission in 2019.

Located next to the 3Arena, the apartments would comprise a mix of one-, two- and three-bedroom units, with balconies and winter gardens at each level of the development creating what the developer describes as a “high-rise garden village at the heart of Dublin’s new riverfront district”.

On its website, RGRE says the Waterfront scheme will provide a range of amenities which will be open to both residents and visitors alike. These include “Ireland’s highest public viewing deck, a visitor experience, Dublin’s highest restaurant, a pop-up restaurant incubator space, start-up office incubator space, cafes, crèche facilities, restaurants, a farmers’ market, a bakery, and a waterfront townhall space that will be made freely available to the local community, designed to host meetings, events, music, dance, and drama groups”.

While it remains to be seen if An Bord Pleanála will approve the developer’s residential proposal, Waterfront South Central will, upon completion, also comprise some 300,216sq ft (27,891sq m) of offices.

The enabling works for the wider development commenced last September. The contract for this part of the project was awarded to Roadbridge, who worked with Ronan on the development of the Ritz-Carlton Hotel in Co Wicklow.

RGRE and its funding partners Colony Capital acquired the Waterfront South Central site for €180 million in 2018.