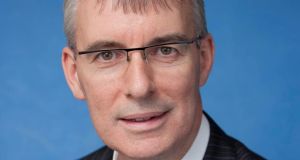 Irish Life is about to re-enter the commercial property investment market after an absence of almost eight years.

The country’s largest property fund is believed to have up to €200 million available to acquire office and retail investments which are now seen as good value after the severe slippage in prices in recent years.

Martin O’Reilly, head of Commercial Property Fund Management in ILIM, told The Irish Times he believed this was a good time to invest in commercial property because income returns – a key characteristic of why institutions use diversified portfolios to invest in property – were broadly in line with market returns of around 9 per cent.

He said the significant repricing of the market was now reflected in the prime yields which had moved from 3.5 per cent out to around 7 per cent over the past three to six months, with the equivalent yields probably at about 6 per cent.

Though the retail sector was more challenging, there had been a big yield movement on Grafton Street from 2.5 per cent to anywhere between 6 and 7 per cent, depending on the characteristics of the building.

“As a counter cyclical investor you can’t always call the absolute bottom of the market but all the characteristics feel right for us in terms of where pricing has got to and where we are at this particular time for a long term investor,” he said.

Property assets
Irish Life, the country’s biggest life and pensions provider, is also by far the largest Irish property investor with assets standing at €1.8 billion. About half the property assets by value are in Ireland and the balance are in the UK and Continental Europe.

The properties are held in two separate portfolios, a pension fund and the other for life policy investors.

During the boom years, there was a steady flow of money into the retail sector by those holding life policies but as soon as the market turned and values dropped, investors withdrew around €30 million, much of it at reduced values. Overall Irish capital values are down by around 64 per cent since the 2008 peak.

O’Reilly says Irish Life makes it clear to its clients that when investing in commercial property funds “you can’t be a short term player, you have to look at the long term”.

Nobody knew exactly when a real rebound was going to come because inherently it would require a broader based recovery from the Irish economy.

Market focus
He said that as a property specialist he focussed on the occupier market which was set by a list of parameters which he could not influence: interest rates, weight of money, sentiment, the relative attractiveness of Ireland by comparison with other markets and property yields relative to bonds and equities.

Turning to the Dublin office market, O’Reilly predicted a “looming scarcity of supply” because there had been no new developments in the past five years. He said there were potential pre-let requirements in the market but these could not be accommodated. He believed that these inquiries would lead to pre-lets rather than speculative developments. Rent levels for prime space had bottomed out at €27.50 per sq ft (€296 per sq m) and were now up to €32 per sq ft (€344 per sq m) but this was still not an economic level to sustain development.

Tenants looking for space would need to be offering €35 to €50 per sq ft (€376 to €538 per sq m), depending on lease terms, covenants and the cost of the proposed sites. Rents were the key to new developments and while he could not say that deals would be concluded in the next three months or six months, he believed it would happen in a relatively short time.

Irish Life’s acquisition priority at this stage is to find good quality office properties in strong locations and with appropriate rent levels. It also plans to look at older buildings in the right locations where value can be added through refurbishment.

O’Reilly said that income returns from its property portfolio were running at 8 or 9 per cent. Office values were rising while those in the retail sector had stabilised and rents were under some pressure.

Asked whether Irish Life would consider re-entering the apartment rental market after about 20 years, O’Reilly said that its business model meant it had knowledge and experience of the commercial property sectors but did not have “any appetite or ambition to invest in the residential sector”.