Taoiseach acknowledges issue of taxation of multinationals is under increasing focus 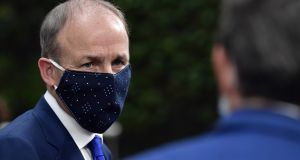 Taoiseach Micheál Martin wearing a face mask as he arrives for an EU summit in Brussels. Photograph: John Thys/EPA

Ireland would oppose European Union proposals to introduce a digital tax as things stand, Taoiseach Micheál Martin said in Brussels on Friday, arguing that more research was needed into its economic effects.

“We think Europe needs to give far more detailed consideration to other proposals including, for example, a digital tax, the full implications of that at a time of unprecedented economic upheaval would need to be fully examined,” the Taoiseach said. ”We would not be supporting that ... because Europe is taking a hit economically. We don’t want to do anything that would create further hits or further unintended consequences.” The Taoiseach spoke as he joined a summit of European leaders in Brussels at which member states will try to hammer out agreement on the next EU budget and a €750 billion recovery fund aimed at counteracting the deep economic damage of the coronavirus pandemic. A digital tax is cited as one way in which the EU could repay the €750 billion in borrowing proposed for the recovery fund, which the European Commission plans to borrow from financial markets and distribute to member states according to their needs for assistance. The tax is not up for discussion at this weekend’s summit, which is focused on finding agreement on the size and broad parameters of the recovery fund and budget, but it is pencilled in for discussion in autumn and next year.

Mr Martin acknowledged that the issue of the taxation of multinationals is increasingly under focus internationally: the EU has said it is determined to crack down on practices it sees as unfair in the wake of a ruling that found Ireland’s tax treatment of the tech giant Apple earlier this week did not constitute state aid. ”Without question, this is an ongoing agenda in terms of the global world situation, and big global companies and the need of states ... to have sufficient revenue Europe wide to deal with all the challenges that are facing us,” the Taoiseach said.