IFSC block sold to insurance firm for over €40m

Italian company buys one of the district's original office buildings 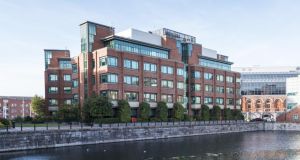 Demand for the original office buildings in Dublin’s IFSC continues to hold up with another block, 3 Harbourmaster Place, selling to an Italian insurance company at a yield of 5.2 per cent.

Several other blocks bought in the past three years by Irish investment funds and REITs have been, or are due to be, refurbished to capitalise on the significantly higher rents available in the area.

Colm Luddy of CBRE and Domhnaill O’Sullivan of Savills secured in excess of €40 million – more than €2.5 million above the guide –for 3 Harbourmaster Place which was sold on the instructions of receivers Grant Thornton.

The two groups of owners were in a position to claim 100 per cent capital allowances on the tax-driven investment over the initial 10-year period.

Another of the original office buildings in the IFSC, the slightly larger 2 Harbourmaster Place, was sold at the end of 2014 to Ardstone Capital for €37.85 million in a deal that is showing a net yield of 5.4 per cent.

The building is strategically located overlooking George’s Dock and close to Connolly railway station where the transport services include the Dart, Arrow and suburban rail and regional schedules, and the Luas Red Line.

The office accommodation is fully let, producing a rental income of €2,456,000 per annum.

With a weighted average unexpired lease term of around 4.38 years, the new owners should be able to negotiate surrenders to allow them to upgrade the various floors with a view to increasing the rent further.