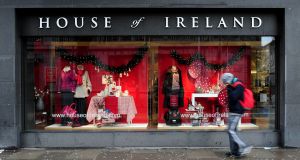 House of Ireland has repudiated a lease to operate from the redeveloped Frascati Shopping Centre in Blackrock, Co Dublin. Photograph: Aidan Crawley/Bloomberg

Gift and lifestyle store House of Ireland has repudiated a lease to operate from the redeveloped Frascati Shopping Centre, Blackrock, Co Dublin, in a row over a works compound for 45 apartments at the centre, it has been claimed in Commercial Court proceedings.

With the redevelopment due to be completed next month when the remainder of the shopping mall is opened to the public, landlord IMRF II Frascati Ltd Partnership says House of Ireland Ltd has repudiated the lease for one of the high-profile units.

House of Ireland claims misrepresentation in relation to a temporary works compound for the 45 apartments that will sit on top of the centre, due to be completed in August-September 2020.

House of Ireland says the landlord misrepresented the facts about the works compound relating to its location, as a result of which, it says, there was a repudiation of the terms of the lease.

It will include new retail units, seven new food and beverage outlets and extended car parking. Work has been carried out on a phased basis since 2017 to ensure original traders could continue to carry on their business.

John Bruder, director of Burlington RE Property, the agent for the landlord, said in an affidavit that when House of Ireland negotiated a lease to take up one of the new units it was on the basis of the exclusion of similar competitor brands that had shown interest.

The parties agreed the lease, with an annual rent of €175,000, would be held in escrow by a third party until the day after practical completion of the unit.

When the dispute over the apartment works compound arose, the landlord rejected the claims of misrepresentation, Mr Bruder said.

Last February, the landlord agreed mitigation measures to ensure the visibility of the House of Ireland store from the street as well as a pedestrian walkway to improve access to it.

The defendant insisted the lease was at an end and legal proceedings by the landlord followed.

Mr Bruder said that, with completion and handover of the refurbished centre due next month, a high-profile vacant unit, which House of Ireland was due to occupy, would be unsightly and have a direct negative ability to market the remaining units in the centre.

Mr Justice Robert Haughton admitted the case to the fast-track Commercial Court this week following an application from Kelley Smith, for the landlord.

Gavin Ralston SC, for House of Ireland, said his client would be defending the case in full.

1 Boeing identifies new software flaw in grounded 737 Max
2 ‘Life in Vilnius reminds me of Ireland in the 1990s’
3 Dublin housebuilder records €11m gain after striking deal with bankers
4 European shares touch all-time peak
5 Latecomer to science brings a woman’s insight to cure most common health issue
6 Property prices across State ahead by 1.4% in year to November
7 Hogan warns Britain on US trade deal as EU set to impose tariffs
8 GoMo is being investigated by advertising authority
9 Ten of the most mysterious aircraft disappearances
10 Greencore investors urged to spurn Coveney’s €315,000 pension
Real news has value SUBSCRIBE