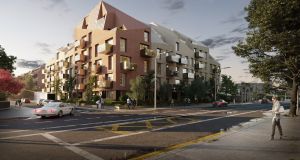 A computer generated image of the apartments to be built on 143 Merrion Road.

Irish housebuilder Lioncor Developments received the green light from An Bord Pleanála to build 63 apartments on the site formerly occupied by Gowan Motors on the Merrion Road in Dublin 4.

The developer, led by chief executive John Maxwell, got permission from the State’s planning appeals board after local residents objected to the plan and appealed the permission granted by Dublin City Council in February of this year.

The roughly half-acre site was sold in 2018 by the Gowan Group for an estimated €18 million, The Irish Times reported at the time. Formerly a Peugeot dealership, the site had been in operation for over 30 years but the limitations with the site meant operations couldn’t be expanded.

Additionally, 45 car parking space and 84 bicycle spaces will be built at basement level on the site which is a stone’s throw from St Vincent’s Hospital and Elm Park Golf Club. Also nearby are several bus stops while the Sydney Parade Dart station is about 650 metres from the site.

The Herbert Avenue Residents Association complained to Dublin City Council that the development would be “out of kilter” with the avenue. The National Transport Authority supported the development.

It was the Merrion Road Residents’ Association which appealed the development after the council found it wouldn’t seriously injure the residential amenity in the vicinity.

When the permission was before the council, the Merrion Road Residents’ Association suggested the design was “too bulky”.

Aside from 143 Merrion Road, Lioncor’s portfolio includes a prime apartment site in Dundrum; a new housing scheme on Taney Road, Dundrum; a boutique housing development named Condor on Killiney’s Church Road; and an office building in Dublin city centre which is currently being developed to house the European representation in the Republic. The company is backed by Oaktree Capital.

The Merrion Road development was designed by architects Urban Agency.