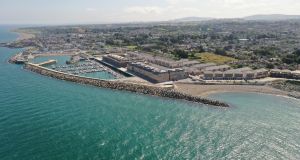 The Marina Village development. Glenveagh’s sale of the Greystones portfolio is in keeping with its commitment to accelerate the sales of ‘non-core, high-end developments and sites’.

Glenveagh Properties is on course to secure over €60 million from the sale of more than 100 apartments at its Marina Village scheme in Greystones, Co Wicklow, to the German investor Realis.

The transaction, which is expected to be completed in the current quarter, represents the second purchase by Realis of a residential portfolio from Glenveagh, and its third investment in the Irish property market to date.

The German-headquartered fund made its first acquisition in Dublin in October 2019 with an agreement to pay € 46 million for the 56 private rented sector (PRS) apartments being developed at Ropemaker Place in the city’s south docklands by Pat Crean’s Marlet Property Group.

Its second deal took place just over one month later, when it paid more than €55 million to secure ownership of the 87 high-end apartments Glenveagh was developing at its Herbert Hill scheme next to Dundrum Town Centre in south Dublin.

But while the apartments at Ropemaker Place have since been targeted towards the upper end of the city’s rental market with rates of €2,800 per month being sought for the scheme’s two-bedroom units, Realis has pursued a different strategy in relation to the accommodation at Herbert Hill.

As first revealed by The Irish Times in June 2019, the Dundrum scheme was offered for sale quietly on Glenveagh’s behalf by Davy Corporate Finance with the option for the purchaser of entering into an agreement with Dún Laoghaire-Rathdown County Council on the long-term lease of all 87 apartments for use as social housing. Realis has since pursued this option and is understood to be in receipt of about €2.1 million in guaranteed annual rental income from the council.

While the German investor has yet to finalise its purchase of the apartments at Marina Village in Greystones, The Irish Times understands there are no plans at this point for it to pursue a deal similar to the one at Herbert Hill with Wicklow County Council.

Glenveagh’s sale of the Marina Village portfolio is in keeping with the commitment it gave last September to accelerate the sales of “non-core, high-end developments and sites”.