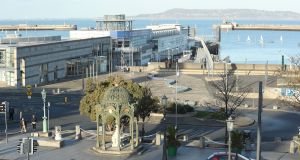 The old ferry terminal, Dún Laoghaire. The proposed scheme was expected to be home to companies working across technologies including artificial intelligence, virtual reality, data analytics and blockchain

A developer who has cancelled a €20 million plan to transform the old ferry terminal in Dún Laoghaire into a technology campus says the scheme will not be rekindled, even if licensing problems cited as an obstacle to it are overcome.

Philip Gannon of Blond Capital received planning permission at the end of July to develop a 7,000sq m digital hub at the harbour site. The Harbour Innovation Campus was slated to support up to 1,000 jobs and 50 companies and bring in an estimated €6 million a year to the area.

On Tuesday morning, however, he issued a statement saying he was pulling out of the plan. He cited as his reason that the landlord, Dún Laoghaire Rathdown County Council, which recently subsumed Dún Laoghaire Harbour Company, has not yet obtained the foreshore licence needed to rent out the old terminal.

In response, the council issued a statement saying it was “taken aback” by Mr Gannon’s sudden withdrawal. It suggested obtaining the foreshore licence was a near-term formality, and insisted it “still supports the project and believes it can proceed at this location”.

When the developer was asked subsequently by The Irish Times if there was any possibility that the scheme may be rekindled if the foreshore licence was finalised, a spokesman for Mr Gannon responded, “No.”

“Two years after the ferry terminal building was put up for lease, one year after I signed the lease and seven weeks after I received planning permission, there was still no foreshore license in place and no notification from [the council] as to when one would be issued,” Mr Gannon said.

“This project is privately funded, so in the absence of any concrete information in relation to the foreshore lease, I feel that I had no choice but to cut my losses and terminate the lease agreement,” he said.

The proposed scheme was expected to be home to companies working across technologies such as artificial intelligence, virtual reality, data analytics, the Internet of Things (IoT), 5G and blockchain.

High profile tech investor Ian Lucey said he originally conceived of the idea in 2015 when he was looking for office space.

“While searching in Dublin I was struck by the ferry terminal and imagined its potential to become a hub for innovation,” he wrote recently on LinkedIn.

Company documents show Mr Lucey initially took a stake of about 13 per cent in the project, with Mr Gannon holding the rest. Mr Lucey said he “stepped back” from the project once planning was granted in July and sold most of his stake, but he “remains a shareholder”.

The day before he stepped down from the board of Harbour Innovation Campus in July, another director, tech investor Declan Conway, also resigned after just five months. Mr Gannon also converted €300,000 of loan notes in the scheme into further shares, according to company filings.

Cormac Devlin, a local Fianna Fáil councillor who narrowly missed out on a Dáil seat in 2016, said he was confused and surprised by the apparent end of Mr Gannon’s proposal.

“It’s devastating news. I’m in shock. All stakeholders need to find a way to work together to rekindle it,” he said.

1 Revenue publishes list of companies tapping State for wage support
2 Grocery shopping app Buymie delivering for Devan Hughes
3 107 jobs at risk as Broderick’s shareholder considers examinership
4 Developers may need to go back to the drawing board as one-beds fall from favour
5 How long can Government afford to keep State pension age at 66?
6 Bake-off soy sauce tweet backfires for UK trade ministry
7 Will remote working become the norm?
8 Covid-19 will have a significantly worse impact on UK public finances than on ours
9 Trump vs Biden: Stakes are high for the Irish economy
10 Tighter regulations for car makers will drive buyers to choose electric
Real news has value SUBSCRIBE