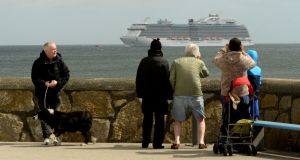 The chief executive of the harbour company said the 10-year lease would not interfere with the company’s plans to develop facilities for cruise ships. Photograph: Cyril Byrne

A planning application for a change of use of the former ferry terminal in Dún Laoghaire Harbour, from duty-free shops and passenger services to a 450-job technology cluster, is to be lodged in coming weeks.

The move comes as Dún Laoghaire Harbour Company is in advanced negotiations with a preferred bidder for a multimillion euro, 10-year lease on the building.

The plan to redesignate the terminal is an attempt to generate an income from the building, which was opened 22 years ago to facilitate Stena’s Dún Laoghaire-Holyhead ferry service, which was subsequently withdrawn

Confirming the negotiations on the lease and change of use of the former ferry terminal at St Michael’s Pier, Gerry Dunne, chief executive of the harbour company, said a public tender process had identified a preferred bidder for a 10-year lease on the building,

Although Mr Dunne declined to name the preferred bidder, he said the plan involved the creation of 450 jobs in the building. Mr Dunne said the jobs would be in the technology start-up sector as well as “at least one if not two” nongovernment agencies.

He said the new use of the building would bring “52-week vibrancy” to the harbour instead of “the 26 weeks we have now”. He said the addition of predominantly young people working in what he described as a “fantastic” location would be important for the town in terms of those seeking accommodation, shopping and entertainment.

The ferry terminal building is located directly opposite Dún Laoghaire Dart station and its windows offer marine views over the water.

Mr Dunne said the harbour company was in pre-planning discussions with Dún Laoghaire-Rathdown County Council and in the final, legal stages of a lease with the proposed new occupier.

He declined to specify the rent secured for the building but last year letting agent Lisney was quoting an indicative rent for the front section of €215 per sq m (€20 per sq ft) for a 10-year lease.The terminal building covers 7,000sq m (75,000sq ft) and has been used for exhibitions since the Stena ferry service withdrew.

Mr Dunne said the 10-year lease would not interfere with the company’s plans to develop facilities for cruise ships as the building was on the east side of St Michael’s Pier, while the cruise berth was proposed for the west side. Bord Pleanála’s decision to grant planning permission for cruise ships was recently referred back to the planning authority, by the High Court, following a judicial review.