Sale of loans was not done on the open market, contrary to normal Nama policy 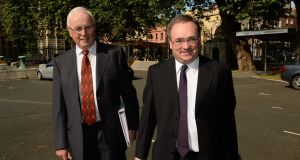 Politicians are set to quiz Nama chairman Frank Daly and chief executive Brendan McDonagh on a €455 million deal where some of those who owed the agency money played a part in selecting bidders for the loans that it sold.

The Oireachtas Committee on Finance, Public Expenditure and Reform is due to question Mr Daly and Mr McDonagh on the organisation’s accounts for 2016 in coming weeks.

Committee chairman John McGuinness TD pledged that it will question Nama on Project Tolka, the sale of loans to developers John Flynn, Paddy Kelly, the McCormack family and others to American firm Colony Capital for €455 million.

“We are going to question them about Project Tolka, but not just that particular project. There are others that I am concerned about as well,” the Fianna Fáil TD said.

Project Tolka is already facing possible scrutiny by the State’s financial watchdog, Comptroller and Auditor General Séamus McCarthy, because it was not done on the open market, which is Nama’s normal policy.

Instead, following the advice of its lawyers and agent, UK firm Eastdil Secured, Nama agreed a list of nine potential bidders for the assets with some of the 186 debtors whose loans were included in Project Tolka.

Eastdil advised Nama that a closed process would result in a better price than a sale on the open market. The agency is obliged to get the best value possible when it sells loans or properties.

Nama and its advisers feared that a sale on the open market could have left buyers at risk of legal action from debtors. There were problems with title to properties against which some loans were secured.

Although Nama’s account is normally reviewed by the Public Accounts Committee, the finance committee also has a remit to do this. “We are going to exercise that right,” Mr McGuinness said. A date will be set for the hearing shortly.

Meanwhile, PAC chairman, Fianna Fáil TD Séan Fleming, said that a Commission of Investigation into Nama’s €1.6 billion sale of its Northern Ireland loans will examine the meeting between Mr Daly, Mr McDonagh and representatives of the portfolio’s buyer, Cerberus.

“This matter will be examined by the Commission of Investigation into Project Eagle,” Mr Fleming told a conference on new corporate governance rules for State bodies run by Public Affairs Ireland.