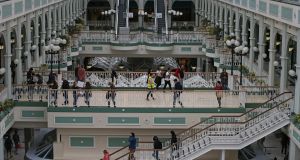 Shoppers in the Stephen’s Green Shopping Centre. CBRE says it is vital that landlords and tenants work together to find solutions to avoid further casualties in the retail sector. Photograph: Nick Bradshaw for The Irish Times

Ireland’s commercial property market has experienced a “lost quarter” as a direct result of Covid-19, with transactional activity having effectively ground to a halt since sale campaigns were put on hold across all sectors in March. That’s according to the latest bi-monthly report from CBRE, which is due for publication on Wednesday.

But while the lockdown period has had a profound impact on the market, the report’s authors believe that it simply served to accelerate structural property trends that were happening anyway.

A recovery is “now in sight for some property sectors”, CBRE says, with demand expected to be “particularly strong” for the multi-family or private rented sector (PRS) residential sector over the coming months. The outlook for the retail and hospitality sectors is far less promising, however, with both likely to remain “in the eye of the storm” for some time yet.

Commenting on the potential longer-term impact of Covid-19 on the commercial property market, CBRE’s head of research, Marie Hunt, said: “The extent to which real estate pricing has been impacted by market uncertainty and rising funding costs remains to be seen, albeit every sector and subsector of the property market will be impacted differently.

“The extreme volatility of the last cycle and the extent to which Irish property values declined during the global financial crisis is understandably still fresh in investors’ minds, but this downturn is different in many respects. While the pace of descent has been considerably quicker, this downturn is not a liquidity crisis. Leverage is considerably lower than it was in 2008 and 2009, and oversupply is simply not a concern in most sectors of the market. The ownership profile of Irish real estate is also utterly transformed. Therefore, any deterioration in value that is experienced as a direct result of Covid-19 is likely to be moderate by comparison to the severe value declines experienced in Ireland during the last property market downturn.”

Looking at the prospects for specific sectors of the market, CBRE says that a number of office requirements and transactions that had been put on hold over the last number of months are now “reigniting”, while enquiries and socially distanced inspections of available buildings have started to take place again. The take-up of office space for the second quarter will, however, only be a fraction of that recorded in the first quarter of 2020, meaning it will likely be another three months before a meaningful improvement in leasing volumes takes place.

In terms of supply, the report notes that just 140,000sq m of new office stock will be completed in Dublin this year, while nearly 70 per cent of the 256,000sq m due for completion in 2021 is already pre-committed. Commenting on those numbers, CBRE says: “Oversupply is clearly not a concern in this particular cycle. For now, it is too early to gauge how much ‘grey space’ will come back to the market if companies ultimately look to rationalise their footprint. Despite this, we are not forecasting a major deterioration in prime headline office rents in the Dublin market in this particular cycle.”

Turning to the industrial and logistics sector, the report says demand for modern facilities remains robust, with companies requiring additional warehouse accommodation to hold inventory as a direct result of Brexit planning or to support increased online retail sales activity.

“The biggest challenge facing industrial and logistics occupiers in the short to medium term will be a shortage of modern accommodation – a situation that has been exacerbated by the complete cessation of non-essential construction during the lockdown period, which has pushed out completion dates of new buildings by at least three months. This acute supply-demand imbalance will insulate headline rental values in this sector of the market, with no discernible rental decline anticipated in this cycle.”

The retail sector has, in contrast, been dealt a severe blow by the Covid-19 crisis, according to CBRE, the impact of which is likely to have far-reaching consequences.

On this, it says: “While all categories of stores are now adjusting to phased reopening, the reality is that this is far from a return to normality for many retailers. Following the initial euphoria when stores first reopened, many retailers are now realising the extent to which consumer behaviour, footfall and ultimately turnover have been impacted.

“ It is inevitable that vacancy will rise in many schemes and high street locations, while retail rents will ultimately decline as a direct result of increased availability and weaker demand.”

CBRE says it is vital that landlords and tenants work together to find solutions to avoid further casualties in the retail sector. To this end, it expects to see “considerable re-gearing” of existing leases and an increasing number of retailers paying rents monthly as opposed to quarterly or moving to a turnover-related solution for the foreseeable future if that is an option”.

While more than € 300 million of transactional activity was recorded in the Irish investment market in the second quarter, the report’s authors note that this was considerably less than the volume which would have been transacted had the country not gone into lockdown in March.

Referring to the prospects for the remainder of this year, they say that while the appetite from international investors remains strong, the “unprecedented cessation of transactional activity has focused minds and reminded investors of the significance of the level, duration and quality of income”. CBRE says it expect this to lead to a “flight to quality” by investors over the coming months.

The market for development land, meanwhile, has effectively ground to a halt over recent months, the report says. And while there is little sign of distress in the sector, CBRE says the pricing of sites will remain challenging in the absence of clarity on funding costs and the impact on construction costs as a direct result of Covid-19 delays and changes to work practices on sites.

“For this year, the completion of even 15,000 housing units looks ambitious considering the slowdown in development that has occurred as a direct result of the Covid-19 lockdown,” the report says.

The multi-family or private rented sector (PRS) market continued to perform strongly, with both rent collection and occupancy holding up in the face of the Covid-19 lockdown.

While CBRE notes that the sector has been “insulated somewhat” by Government supports such as the wage subsidy scheme and the ban on evictions and rent increases, the severe imbalance between the supply and demand of rental stock has also been “instrumental”.

Referring to the outlook for PRS market, the report says: “Investor appetite for multi-family opportunities in the Dublin market remains strong, with a large volume of European capital targeting investment in this sector and particularly strong demand for forward-funding opportunities. An increasing number of buyers are targeting schemes that are leased to Approved Housing Bodies and local authorities.

Pricing for prime multi-family product has remained unchanged over recent months, with yields steady at 3.75 per cent. If there are price adjustments over the coming months, as a result of rising debt costs, more conservative rental growth assumptions or concerns about the sustainability of income once wage supports are removed, this yield shift is expected to be marginal – in line with trends witnessed in other European jurisdictions.

Turning to the hotel sector, CBRE says it expects transactional activity to remain subdued for a number of months while hoteliers focus on the survival of their core businesses.

Looking beyond that, the report says: “While there is some activity under way off-market and there has been a discernible increase in enquiries and some property viewings in the last couple of weeks, it is likely to be later in 2020 before any hotel sales campaigns are reignited or new hotel sales mandates formally launched.”

1 If international visitors are pariahs should we not be testing them on arrival?
2 ‘My rent here is so low it’s a joke’
3 Belgium helps Ireland to a Brexit boon
4 Varadkar to meet banks in row over interest on mortgage payment breaks
5 Can Grafton Street stop the flood of closures?
6 WeWork on track for profits in 2021, says chairman
7 Goodbody loses a second suitor as Bank of China deal falls through
8 So you want to invest in the stock market: what will it cost?
9 FC Barcelona to pursue Nike for compensation over defective shirts
10 Banks will be judged less on payment breaks and more on next step
Real news has value SUBSCRIBE