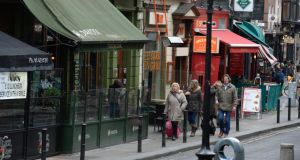 Cafes on South William Street: Dublin made it to fourth place in the Matador network’s list of the world’s best cities for coffee lovers and is hosting the world barista championships next year. Photograph: Dara Mac Dónaill

Dublin City Council has set up a working group to examine the various issues relating to cafes and restaurants replacing city centre shops, in the wake of criticism that planning policies on changes of use are both restrictive and contradictory.

An “issues paper” for the next city development plan (2016-2022) also raises the question of what kind of planning approach should be taken and queries whether an “appropriate balance” between retail and restaurants is struck in the current plan.

The latest move by the council’s economic development and enterprise policy committee came as Dublin made it to fourth place in the Matador network’s list of the “world’s best cities for coffee lovers”. (The top three were Sacramento, Manila and Vancouver.)

“Dublin is a city known to imbibe – mostly alcohol, not coffee. But the boozy city is taking to cafe culture,” wrote reviewer Elyssa Goldberg. She named the Art of Coffee, Fixx, Vice Coffee Inc, the Bald Barista, Butlers Chocolate Café and 3FE as being the best.

championships With Dublin hosting the

world barista championships next year, the city council is waking up and smelling the coffee (as they say) – not least because of studies showing cafes and restaurants are among the main attractions in the city centre for younger people.

Richard Guiney, chief executive of the Dublin City Business Improvement District – which covers the main retail areas around Grafton Street and Henry Street – says young Dubliners “are drawn to the city for its vibrant restaurants, shops and bars in equal measure”.

After hearing estimates that online shopping could swallow up to 35 per cent of non-food retail sales by 2020 (up from 12-15 per cent now), he says “we must embrace, manage and maximise the leisure economy . . . if we don’t want to see our streets fade and die”.

Against this seismic backdrop, Guiney says the “larger and more savvy retailers are looking for a good balance of retail and leisure provision – including restaurants, bars, cafes and cultural attractions – when choosing where to make their investments”.

The “most delicious sector of the economy”, as the New York city economic development corporation calls it, is thriving in the Big Apple, “with food as creative and diverse as pizza, bagels, sushi, empanadas, artisanal cheese, and all of the ethnic offerings in between”.

The corporation’s most recent “economic snapshot” of New York showed how new “culinary innovation clusters” are emerging in parts of Brooklyn, Queens, and even the Bronx – led by young entrepreneurs, natives and recently arrived immigrants alike.

“Add local artisans, street vendors, and restaurateurs, major food manufacturers, and vast distribution networks to the mix, and we see how food is a vital part of New York city’s economy,” it says, adding that it’s no wonder New York is “the food capital of the world”.

Restaurants have been a major growth sector in Dublin, surprisingly during the recession, and this is expected to intensify as the economy improves. But there is still uncertainty about securing planning permission for changes of use from shop to restaurant.

Inconsistencies in planning policy were highlighted recently in South Great George’s Street by An Bord Pleanála approving plans to extend the Market Bar in Fade Street into a vacant shop building while refusing approval for a restaurant right next door.

In both cases, the planning inspectors referred to the city council’s policy to “uphold the primacy of retail” in secondary shopping streets such as South Great George’s Street, which has led to proposals for changes of use to restaurants being turned down.

Although a visual survey showed that there were still 27 retail units on the street compared to 17 “restaurant-type units”, a council planning officer expressed the view that the “large number of restaurants and cafés [had] reached saturation point”.

1 Columbia Sportswear defies gloom with first Irish standalone shop
2 How to further divide the economy using the wage subsidy
3 Why are markets booming when a crash is on the way?
4 Could your old car be giving away all your secrets to its new owner?
5 VAT cuts are for businesses – consumers will still pay the same
6 ‘The rental situation stops me moving back home’
7 Restaurants file court actions against insurers over lockdown losses
8 Ireland faces 'deep downturn' this year and may not rebound until 2024 if there is a second wave
9 Brexit: System agreed for Irish goods to skip checks on UK trade
10 High Court appoints interim examiner to Compu b parent company
Real news has value SUBSCRIBE