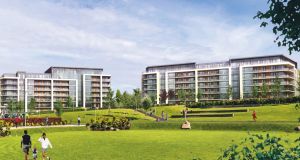 Cheevers Court and Haliday House in Dún Laoghaire: Deutsche Bank subsidiary DWS is paying an average of €570,652 per unit

A real estate fund managed by Deutsche Bank subsidiary DWS is closing in on the €210 million purchase of 368 apartments being developed by the Cosgrave Property Group in Dún Laoghaire, Co Dublin.

The proposed deal represents the German-headquartered fund’s second acquisition at the Cualanor scheme in under a year. Last May, DWS paid €108 million for 214 apartments at the Fairways. While that price equated to an average of €504,000 per unit, it pales alongside the average of €570,652 the fund is set to pay for the final 368 apartments at Cualanor.

The sale of the units at Cheevers Court and Haliday House is the fourth major private rented sector (PRS) deal the Cosgraves have secured through agent Hooke & MacDonald since 2016 at Cualanor and the neighbouring Honeypark scheme, which they are developing on the former Dún Laoghaire Golf Club lands.

Both Patrizia and pan-European real estate investment manager Europa Capital are understood to have been among the seven other investors to have bid against DWS for Cheevers Court and Haliday House. The strength of the competition between the parties is certainly reflected in the proposed €210 million sale price. The figure represents a significant premium on the €180 million the portfolio had been guiding when it was brought to the market. Hooke & MacDonald declined to comment on the sale when contacted by The Irish Times.

The Cosgrave Property Group has led the market in recent years in the simultaneous development of large-scale apartment projects for both the private rented sector and owner occupation in Dublin.

In keeping with this twin-track strategy, the Cosgrave’s disposal of the Cheevers Court and Haliday House PRS portfolio follows on from its sale to the traditional owner-occupier market of over 400 houses and 150 apartments at the wider Cualanor and Honeypark development.

The scheme’s amenities include extensive gardens, parklands, a piazza, off-street car and bicycle parking, playgrounds and mature wooded areas. The overall development also benefits from access to the Park Pointe neighbourhood centre at the entrance of Honeypark.