Case relates to sale of Walford, once country’s most expensive house, on Shrewsbury Road 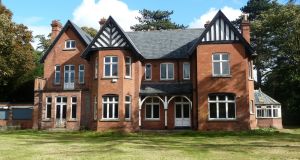 Walford, on Shrewsbury Road, Ballsbridge, Dublin 4, was bought in 2005 for €57 million in trust by Mr Dunne for his now ex-wife Gayle Killilea

A company owned by bankrupt developer Seán Dunne’s son John Dunne should pay €270,000 stamp duty – and not some €1.4 million as assessed by Revenue – on the sale of what was once the country’s most expensive house, the High Court has been told.

Walford, on Shrewsbury Road, Ballsbridge, was bought in 2005 for €57 million in trust by Mr Dunne for his now ex-wife Gayle Killilea.

Yesreb appealed and a tax appeals commissioner in 2019 upheld the Revenue assessment.

The appeals commissioner then stated a case to the High Court to determine if she was correct in law.

The hearing began before Mr Justice Tony O’Connor on Thursday.

The appeals commissioner asked the judge to decide whether she was correct in deciding that conditions required under Section 46 of the Stamp Duties Consolidation Act, 1999 were not met by Yesreb which meant it could not avail of tax relief on what was the sub-sale of Walford.

She also asked the judge to decide if she was correct that Yesreb was “the accountable person” under stamp duty law in the 2013 sale and whether she was right where, in determining sub-sale stamp duty relief does not apply, that Yesreb as sub-purchaser was liable for that duty on the first 2005 sale.

Grainne Clohessy SC, for Yesreb, urged the judge to find the appeals commissioner was wrong in her interpretation of the stamp duty law.

The practice of holding property for several years without going through conveyancing was long established, she said.

It is widely used by builders who buy a piece of land and hold off on conveyancing until houses have been built. This meant stamp duty only had to be paid once on the transfer and that was on the sale of each house to its purchaser, counsel said.

Revenue had argued that tax relief was not available on the sub-sale in this case, and the appeals commissioner confirmed that, but it meant her client Yesreb had to pay stamp duty on the combined price of both sales, nearly €72 million.

The liability in this case should only be on the €14 million sale to Yesreb, she said. What Revenue was saying was that Seán Dunne did not qualify for stamp duty relief and it is all on Yesreb on the combined prices, she said.

Jacqueline O’Brien SC, for the Revenue Commissioners, argued there was no error in the appeals commissioner’s determination, and the inferences of her findings were not irrational.

There were two underlying contracts in this case, the first in 2005 and the second in 2013, and stamp duty was assessed on the deed of conveyance of 2013, she said.

Stamp duty is charged on deeds, not on transactions and, absent of Yesreb qualifying for relief on the sub-sale, then the duty is payable on the entire sale, she said.

Counsel also said this was not an “arm’s-length contract” but an arrangement where money never changed hands but where €14 million was loaned by Gayle Killilea.

The hearing continues on Friday.