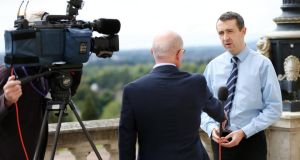 In its first public evidence-gathering session yesterday, permanent secretary of the North’s department of finance David Sterling was questioned by members of the Stormont finance committee.

The committee is inquiring into allegations by Independent TD Mick Wallace that a politician or party was reportedly set to gain by up to £7 million as a result of the purchase of Nama’s 850-property Northern Ireland portfolio by US investment company Cerberus for £1.3 billion.

During yesterday’s hearing Mr Sterling said he was limited in what he could say because of issues of commercial sensitivity and data protection and because he didn’t want to say anything that would prejudice the criminal investigation into the financial corruption allegations being carried out by the British National Crime Agency (NCA). He asked for a number of written questions and said hoped to be able to answer questions in the future.

Mr Sterling said the Northern Ireland advisory committee was set up amid concerns there could be a “fire sale” of Nama’s Northern portfolio.

Mr Sterling said his understanding was that Brian Rowntree, the second appointee to the advisory committee, was put forward by another minister in the Northern Executive. He said he was not in a position to name that minister at present.

Mr McKay expressed frustration that Mr Sterling was not more forthcoming about how Mr Cushnahan and Mr Rowntree were appointed to the advisory committee.

“Given the importance of the Nama portfolio to the Northern economy surely this was done more so than simply the minister writing a couple of names on the back of a fag pack,” he said.

Sinn Féin committee member Máirtín Ó Muilleoir asked if the sale of the Nama portfolio was a mess.

“It would be wrong for me to offer a comment on something for which I have no accountability and no particular knowledge,” said Mr Sterling.

“In my view what is happening is that we are being told that the DFP [Department of Finance and Personnel] is washing its hands of the entire Nama sale,” said Mr Ó Muilleoir. “At the same time appointments were made to the Nama advisory committee which is at the very heart of what is being described as a dirty scheme, the very heart of it. You can’t wash your hands of that either.”

Mr Ó Muilleoir said the department appeared to have been “sleepwalking” through the affair.

Mr Sterling said: “You can only wash your hands of something for which you are responsible. DFP, the department and the Minister, were not responsible for the sale of the Nama [portfolio] . . . ”

“It is totally unacceptable. We are badly served at many levels in this but we were badly served when the most senior person in the department sees nothing at all to worry him, to concern him, about the Nama portfolio,” said Mr Ó Muilleoir.

Mr Sterling said he could “only be accountable for the things for which I am responsible. DFP was not responsible in any way for the Nama sale.”

Mr Ó Muilleoir said Nama, its chairman Frank Daly and Minister for Finance Michael Noonan were making a distinction between the sale and the purchase of the Nama portfolio to Cerberus, insisting there were no issues with the sale. Mr Ó Muilleoir disputed this.

Mr Sterling, who gave evidence for an hour and 40 minutes, was asked to appear again in a fortnight and to be more forthcoming.