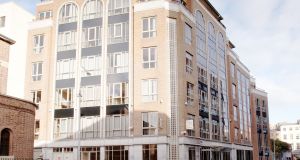 The modern offices of An Bord Pleanála at City Square on Marlborough Street, Dublin 1

DTZ Sherry FitzGerald and Finnegan Menton are inviting offers over €18 million for the modern offices of An Bord Pleanála at City Square on Marlborough Street, Dublin 1, which will give new owners a net return of about 6.75 per cent. The grade A office building was built in 2002 and extends to 3,423sq m (36,856 sq ft) over a basement car park with 22 spaces.

The seven-storey block, occupied by An Bord Pleanála since its construction, is finished to a particularly high standard and benefits from a feature first-floor atrium with a café and meeting area. There is also a large conference room on the ground floor.

The 25-year, full repairing and insuring lease has another 11.25 years to run, until January 2027. The passing rent of €1,270,820 works out at €366 per sq m (€34 per sq ft) and is subject to five-yearly rent reviews, with the next one due in January 2017. DTZ Sherry FitzGerald and Finnegan Menton said the excellent covenant, attractive lot size and extensive ongoing and upcoming improvements to the surrounding area would all ensure the investment attracted institutional investors as well as Irish and overseas private investors. The new Luas Cross City line will run directly in front of the building along Marlborough Street, further enhancing the already good connectivity to other parts of the city.