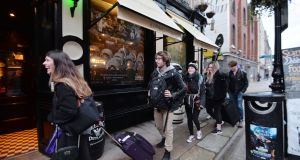 The Capel Street area where residents are objecting to the hitel plan.

Plans for a new hotel in the markets area of Dublin’s north inner city by one of Northern Ireland’s leading hotel groups have been rejected.

An Bord Pleanála has reversed a decision of Dublin City Council to grant planning permission for the development of a 62-bedroom hotel on a 0.2 hectare site that includes the former Boland’s bakery and biscuit factory off Capel Street.

Cathedral Leisure, which is part of the Beannchor group – owner of the five-star Merchant Hotel in Belfast – had originally sought to develop a 96-bedroom hotel on the site, which incorporates a number of protected structures including the Victorian bakery.

In the face of considerable third-party objections as well as concerns from council planners, Cathedral Leisure reduced the size of scheme to a 62-bedroom hotel, while reducing the proposed height of the building from 28 to 15 metres.

The company, which is led by businessman Bill Wolsey, had planned to make Dublin the second location for its Bullitt Hotel brand, launched in Belfast in 2016.

In its ruling, An Bord Pleanála acknowledged that Cathedral Leisure had revised and improved the layout of the proposed ground floor and mezzanine floor of the hotel in the former bakery building, which reduced the amount of fabric to be removed from the protected structure.

However, it said the overall revised proposal was of “poor design” and did not constitute “an adequate response to the context and opportunity of this urban site”.

The board said it had rejected the recommendation of its own planning inspector to approve the project for that reason.

The council’s decision to grant planning permission for the hotel had been appealed by a number of parties including Creekvale, which is seeking to develop a 278-bedroom hotel in a nearby location on the site of the existing Begley’s Fruit Market on Arran Street East.

Creekvale, whose own plans have been the subject of a formal objection to Dublin City Council by Cathedral Leisure, claimed its rival’s scheme would have a detrimental impact on Creekvale’s proposed development.

The company claimed the proximity of the Cathedral Leisure hotel would unreasonably restrict the redevelopment potential of the Begley’s site as well as creating a fire safety issue if both projects went ahead.

A large number of local residents as well as owners and tenants of adjoining premises on Capel Street, Little Mary Street, Meetinghouse Lane and Arran Street East also made submissions.

The council had claimed that Cathedral Leisure’s proposed four-star hotel would represent significant investment in a key underutilised site that would help to realise the local authority’s objective of protecting the vitality of the city centre.

Council planners said the project would have regenerated historic buildings, reutilised a dilapidated area and opened up a backland site with “high-end and innovative new visitor accommodation and publicly accessible spaces”.

The proposal has also received the backing of Fáilte Ireland.