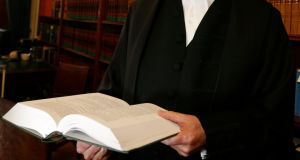 A bank is seeking €1.51 million summary judgment orders against the former chief executive of a healthcare company, representing the maximum sum allegedly due under his limited guarantees concerning loans advanced to the firm.

Mark Gordon’s liability under guarantee arises because the company has failed to repay some €6.02 million, Bank of Ireland claims.

The bank has initiated proceedings against Mr Gordon, Glen Road, Hollywood, Belfast, arising from unpaid loans advanced to VFM Healthcare Ltd, which owned and operated St Francis Private Hospital at Ballinderry, Mullingar. A receiver was appointed to the company in April 2014.

Mr Justice Brian McGovern agreed to transfer the proceedings to the Commercial Court.

After being told Mr Gordon argues he has a defence to summary judgment and the parties had agreed directions for exchange of legal documents, the judge returned the matter to April.

In its action, the bank claims it advanced some €4.8 million to the company under a commercial loan facility of July 2012, and in February 2013 advanced a further facility of some €737,000.

An additional €950,000 was advanced in April 2013 via a temporary increase in the company’s credit card facility, it is alleged.

Mr Gordon, the bank claims, had in January 2011 and July 2012 entered into guarantees of the liabilities of the company up to a maximum of €1.512 million.

The company later encountered financial difficulties and underwent a reorganisation and investment from an entity known as the Steinberg Trust, the bank said.

It added that Mr Gordon had fallen ill in September 2013 and ceased to be actively involved in the day-to-day management of the company, but continued to be employed as chief executive.

The bank said Mr Gordon resigned as a director of the company in March 2014.

At the same time, the Steinberg Trust appointed two non-executive directors as a consequence of an adjusted voting hierarchy under which it acquired 50.1 per cent of the voting rights, while maintaining a 10 per cent shareholding in the group.

A business review was also undertaken by KPMG and Mr Gordon had given assistance in that regard, the bank added.

Notwithstanding the reorganisation, the company later defaulted on its repayment obligations, leading to the bank issuing a demand in April 2014 for repayment of some €6.02 million, it is claimed.

A receiver was also appointed, and the management of the company co-operated with that appointment, it said.

The bank said the €6.02 million sum remains unpaid and, as a result, some €1.512 million is due from Mr Gordon under his guarantees, it is alleged.

Repayment of the €1.512 million was demanded last October and remains due and owing, the bank claims.

1 ‘Saudi Arabia is where the opportunities will happen in future’
2 Trump’s TikTok move may have far-reaching consequences
3 Covid-19 has distracted us from the looming threat of Brexit
4 Data centres will force State to choose between climate and investment
5 MSD buys Takeda biologics plant in Dunboyne
6 Chris Johns: Digital equality must be moved up the priority list
7 He’s almost 82 but Larry Goodman has plenty of moves left
8 Starling resumes talks with Central Bank on banking licence
9 State’s biggest landlord records 30% rise in rental income
10 Irish tourism must also help itself to survive the pandemic
Real news has value SUBSCRIBE