Resistance to replacing building with granite-clad ‘gateway’ to Georgian core 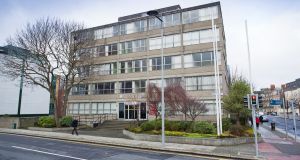 The Robin Walker-designed former Bord Fáilte HQ in Dublin: a submission calling on An Bord Pleanála to preserve the modernist structure compares it to a Renaissance villa 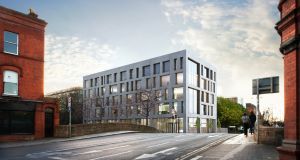 Computer generated image of the proposed new office building to replace the long-shuttered Bord Fáilte HQ on Baggot Street in Dublin: architect Tony Reddy says it will “integrate sensitively with its surroundings”

A ding-dong battle has developed over plans by Irish Life plc to demolish the former Bord Fáilte headquarters at Baggot Street bridge in Dublin and replace it with a significantly larger office block clad in Wicklow granite.

The existing building – now nearly 60 years old and vacant for a decade – was designed by the late Robin Walker and a spirited campaign to save it is being led by his son, architect Simon Walker, on behalf of Docomomo Ireland, the Irish branch of an international organisation dedicated to defending the legacy of modernism.

Simon Walker has expounded on his father’s work in these pages, writing that Bord Fáilte “represents an essay in the modern vernacular – no less important for its humble appearance than those more ostentatious contemporary office blocks that rely for effect on expensive facades and high-tech finishes”.

It’s a tough call. Whereas many people might see the inherent value of modernist buildings such as the nearby former Bank of Ireland headquarters, the Bord Fáilte block – built at a bargain-basement cost of £50,000 in old money – has had few real fans since it was completed in 1961.

Undeterred, the Docomomo submission to An Bord Pleanála (running to 15,000 words) likens it to a Renaissance villa and characterises its raised entrance floor and external staircase as references to Georgian architecture – claims described by architects for the new office block as “stretching credulity”.

Tony Reddy, chairman of Reddy Architecture + Urbanism, says the Bord Fáilte building, like many of its contemporaries, exemplified modernist architecture as an alien force, with its use of exposed formwork, concrete brick and aluminium windows “in stark contrast to its Georgian neighbours”.

Irish Life’s brief was to “design a modern office building to meet the needs of modern knowledge-based companies and to produce a building which is exemplary in terms of its architecture, planning and urban planning, reflecting Irish Life’s tradition of being a long-term manager of its assets”.

Everyone acknowledges that Robin Walker was one of Ireland’s leading modernist architects, as a leading light in Michael Scott and Partners (later Scott Tallon Walker), an academic and a writer. But few would agree that Bord Fáilte is his finest work; that accolade belongs to the Restaurant Building in UCD.

Experts engaged by Irish Life to give their opinions included Paul Finch, editorial director of the Architectural Review and Architects’ Journal, who says interesting architecture “can sometimes outlive its usefulness [and] the worst thing you can do in these circumstances is to sentimentalise the redundant”.

For architect Des McMahon, former president of the Royal Hibernian Academy, the most surprising thing about the Bord Fáilte HQ is that it “bears a much stronger resemblance to a speculative office block” rather than a bespoke building for one of the State’s newest and most significant organisations.

“The shortcomings of the building concept as a standalone symmetrical object became particularly obvious in site use,” says the architect of Croke Park. “Its geometry disregards urban street lines and inevitably results in an ill-defined, gauche, leftover space at the corner of Baggot Street and Wilton Terrace. ”

Describing it as “very much a product of its time”, McMahon argues that the existing building is “no longer suitable for contemporary office work” in the 21st century because it “lacks . . . flexibility and adaptability” – not least its very low floor-to-floor heights of only 2.8m (just over 9ft).

Finch “can see why there are passionate arguments in favour of keeping the existing, but . . . these are outweighed by the inherent difficulties in so doing, and by the quality of the new proposal – a striking piece of architecture that fills its site [and] addresses its frontages in an urban way.

“What you see is what you get, with interior volumes expressed on the facade. The use of Wicklow granite will provide gravity without appearing pompous, and there is no suggestion that this will be a faux-‘iconic’ look-at-me landmark. On the other hand, it is not a shrinking violet . . . nor should it be.”

Reddy says the replacement building, with 6,331sq m (68,000sq ft) of space over five floors, has been designed to “integrate sensitively with its surroundings”, creating a new “gateway” to the south Georgian core. A ground-floor cafe and atrium, he adds, will contribute to a more active street frontage.

As McMahon notes, the external granite screen, “punched by an asymmetrical rhythm of verticals” with deep-recessed windows, “results in the building appearing as less of a homogeneous mass than most office blocks” while simultaneously introducing “an element of the picturesque”.

All plant is to be located in a double-basement rather than on the roof, as in the existing building, and the new block has also been designed to achieve platinum standard under the LEED green building rating system. Even the number of car parking spaces is being reduced from 14 to 11.

An Bord Pleanála is due to make a decision on the scheme, which has already been approved by Dublin City Council planners, within months – probably after an oral hearing at which sparks are expected to fly between those who want to save the 1961 block and proponents of the new building.