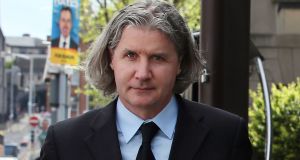 John Reynolds: had sued Altomoravia Ltd and guarantors Thomas Anderson, Colin Dolan and Michael Ormond, who had agreed to take over the POD nightclub. Photograph: Collins

The Court of Appeal has upheld a decision businessman John Reynolds is entitled to some €684,000 damages over failure to implement a settlement of a dispute over transfer of the lease of the POD nightclub in Dublin.

Mr Reynolds had sued Altomoravia Ltd and guarantors Thomas Anderson, Colin Dolan and Michael Ormond, who had agreed to take over the nightclub, arising from failure to execute a settlement reached between the sides over a lease agreement first made in April 2012.

They appealed to the Court of Appeal against a High Court decision in 2015 awarding Mr Reynolds the damages based on findings including they acted in bad faith when they delayed in signing the lease.

Mr Justice Brian Cregan ruled Mr Reynolds was entitled to have the lease contract rescinded along with damages and assessed those at €684,743.

Giving the three-judge Court of Appeal judgment on Friday, Mr Justice Michael Peart said the events in this case “lend weight to the aphorism that, while you may lead horses to water without any particular difficulty, it can be quite another matter to make them drink”.

The heart of the case was a “perfectly straightforward” April 2012 agreement for lease of the POD, to be supported by personal guarantees of the defendants.

When Mr Reynolds had not executed the lease as sought, Altomoravia took proceedings against him which settled in March 2014. The settlement required Mr Reynolds to execute a lease in terms of the draft lease provided, withdraw a planning appeal and for Altomoravia to pay him some €185,000.

The agreed date of March 26th, 2014, for implementation of the settlement passed without any transaction under it being completed as required, the judge said.

While each party blamed the other for the fact the settlement was not completed by the agreed date, “one struggled to understand why it was necessary for these experienced and successful businessmen to fight each other ferro ignique [with fire and iron] over some 13 days in the High Court,” Mr Justice Peart said.

Having analysed the arguments, the law and Mr Justice Cregan’s 76-page judgment, Mr Justice Peart held there was no basis to set aside the findings of fact and conclusions reached by the trial judge.

There was “ample credible evidence” upon which the trial judge could, and did, rely for his conclusion it was the conduct of the defendants and not Mr Reynolds that prevented the agreement being implemented by March 26th, 2014, or any later date, he said.

He noted the appellants had argued the trial judge did not adequately address the significance of text messages exchanged between Mr Reynolds and Colin Dolan, an intended guarantor of Altomoravia’s obligations.

While it was true the High Court judgment did not refer to the text messages, and it would have been preferable if it did, he was satisfied those texts did not have the significance contended for, Mr Justice Peart said. He disagreed with the appellants’ claim the texts were clear evidence of “duplicitous conduct” on Mr Reynolds’s part such as disentitled him to the relief.

It should be remembered Mr Reynolds had suggested to Mr Dolan he take his own legal advice concerning the guarantee, he added.

10 When will we travel again? Nobody knows