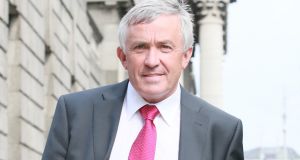 Developer Michael O’Flynn told the High Court that Patrick Cox had downloaded 36,677 internal documents to an external hard drive in May 2015, months before he left. Photograph: Collins Courts

Developer Michael O’Flynn dismissed as “blackmail” allegations that his business kept the State’s National Asset Management Agency (Nama) in the dark about elements of a UK land deal.

Several companies in the O’Flynn group are suing former employees Patrick Cox, Liam Foley, Eoghan Kearney and others saying they made a €12.5 million profit on a student accommodation project on Gardiner Street in Dublin at the business’s expense.

As part of their defence, Mr Cox and the others say the group manipulated the sale of sites in English cities Birmingham and Coventry to local developer JJ Gallagher in 2012.

The High Court heard on Thursday that Nama, which then held most of the O’Flynn organisation’s €1.8 billion bank loans, instructed the group to sell the sites. The defence says that the group “interposed” JJ Gallagher as a buyer to ensure involvement in the properties’ future development.

Mr O’Flynn declared in court that the allegations were “blackmail to stop me taking this case against Mr Cox, Mr Kearney and Mr Foley”. He added that the claims had nothing to do with his group’s lawsuit.

“They have made these outrageous claims under the cover of court, unfortunately for me,” he added.

Mr O’Flynn confirmed that once he heard the allegations, he told his solicitors to write to Nama inviting it to investigate the sale and any other issues it saw fit.

The court heard that the State agency responded last December to say it was satisfied its process was followed. The defendants intend calling a witness from Nama.

While JJ Gallagher originally intended developing them, the company subsequently sold the sites to a partnership of investor, Coral Group, and another O’Flynn company, Grey Willow.

O’Flynn group had informed Nama several times that if the buyer decided to use the sites for student apartments, it could build and manage these facilities.

Coral held 90 per cent of the joint venture and Grey Willow 10 per cent. The proposed price was £5.36 million, reflecting the sites’ value if developed for student beds.

However, JJ Gallagher agreed to sell only after Grey Willow pledged to pay it an extra £1.4 million, the court heard. “We had no control over Mr Gallagher,” Mr O’Flynn said.

The property developer told senior counsel Michael Cush that, while he did not always agree with Nama’s approach, he always sought to do the right thing by the State agency.

Earlier, Mr O’Flynn said he was astounded to learn that Mr Cox had downloaded 36,677 internal documents to an external hard drive in May 2015, months before the former employee left the property group.

“This is the entire London office being stolen from us,” Mr O’Flynn added. It subsequently emerged that Mr Cox later returned this material to the group.

The developer’s companies say Mr Cox’s role included identifying projects such as Gardiner Street for the group. Instead, they say, he and the others used confidential information obtained from the business to develop the student block for their own benefit. The defendants deny the claims.

The group maintains that Mr Cox began working on the Gardiner Street plan while the business still employed him in March 2014, and continued do so up to his departure in August 2015.

On April 29th, 2015, around the time that Mr Cox gave his notice to the O’Flynn group, Mr Foley emailed him saying “you need to watch your step even more so now”.

Asked for his view of the mail, Mr O’Flynn replied that he believed Mr Foley was warning Mr Cox against any slip that would alert the business to what they were doing.

Mr Cush noted that after giving notice, Mr Cox emailed details of a company brochure to Mr Foley and Mr Kearney saying he was interested in hearing if it contained “themes you could rob from this”.

Mr O’Flynn described use of the word “robbed” as extraordinary and said Mr Cox and the others wanted to make sure that they did not miss a trick as they were competing with his group. “I saw no response from either party saying ‘We can’t do this’,” he added.

Mr Foley, who was construction director of several O’Flynn companies, left the group in 2013, while Mr Kearney, an accountant, departed in 2011.

Mr O’Flynn described as “highly” or “extremely” confidential different group documents emailed by Mr Cox to both men during his notice period.