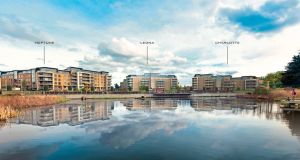 Ireland’s largest build-to-let apartment development is to be offered for sale on the international market only weeks after construction started on the site at Dún Laoghaire, Co Dublin.

Estate agents Hooke & McDonald are guiding €130 million for two planned blocks with a total of 319 multi-family apartments at the former Dún Laoghaire golf course off Upper Glenageary Road. Alternatively, the blocks will be offered for sale separately at €65 million each.

The mammoth project is being funded by Nama and developed by the Cosgrave Property Group which is well on the way to exiting Nama.

The expectation is that the planned 319 apartments will produce an annual rental income of between €7.17 and €7.84 million, equating to an investment yield of between 5.5 and 6 per cent. The large development is due to be completed in the early part of next year.

The two five-storey individual blocks will be a mirror image but on a larger scale to the adjoining Neptune Building, with 197 apartments, which was completed in recent weeks and sold towards the end of last year to two investment groups for €72.5 million, a figure that will show a return of about 5.8 per cent.

The London-based Tristan Capital Partners holds a majority stake in the investment which it bought along with SW3 Capital, an investment company with offices in Dublin and London and headed by Irish partners Tom O’Mahony and Adam Rooney.

The planned Charlotte Building with 159 apartments and the Leona Building with 160 units in the centre of Honeypark will both overlook a landscaped five-acre park, lake and playground area. There will be a considerable mixture of apartment types in both blocks with a total of 197 two-bedroom units, 61 one-beds and the same number of three beds.

Hooke & MacDonald say that based on the exceptional demand for rental apartments in the Neptune Building, they expected that in the two latest blocks one-beds would attract rents of between €1,550 and €1,650 per month, two-beds should make between €1,800 and €2,200 and three-beds were likely to fetch from €2,200 to €2,800.

The two new blocks will have a residents suite for communal use along with a concierge area and gym facilities.

The Cosgrave Group have already developed about 230 high-quality homes at Honeypark along with a range of on-site amenities including neighbourhood centre Park Pointe, where the tenants include Tesco, Costa Coffee, Boots Pharmacy, Base Pizza and TC Matthews.

Designed by architects McCrossan O’Rourke Manning, the apartments will be both spacious and stylish with large windows offering clear views of the Wicklow mountains. The spacious kitchens/ livingrooms will form the centrepiece of the apartments and open out on to balconies.

Bedrooms will be mainly double rooms and feature ensuites with shower doors, baths and towel rails.

In addition to the high quality kitchens there will be a separate utility or store room with flexible space.

10 Glenveagh to charge council up to €791,500 for family apartments