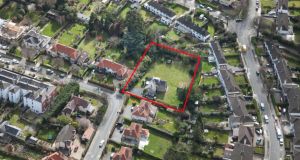 The site at Crosthwaite Park South is 0.6 of an acre

Knight Frank is to begin marketing housing sites in Dún Laoghaire and Foxrock in south Dublin.

The agency is quoting €1.9 million for a 0.6 of an acre at Crosthwaite Park South in Dún Laoghaire, which is currently occupied by a five-bedroom detached house in need of refurbishment as well as an out-garage and garden shed.

Knight Frank says “it is envisaged that an attractive, similar scheme would likely be achievable on the site subject to planning permission.”

The site is ideal for redevelopment as it is flat and is bounded by mature hedgerows.