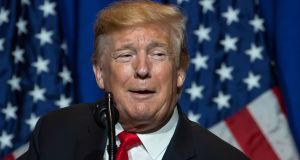 A co-founder of an international trading and technology group that employs more than 500 people in Dublin is one of the largest political donors in the US and a major supporter of the Republican Party.

However it is not the case, as has been suggested in some recent media reports, that Jeffrey Yass supports claims that the recent US presidential election was “stolen”, a person familiar with the businessman’s views told The Irish Times.

Mr Yass, a 65-year-old options trader who was one of the founders of Susquehanna International Holdings, is rated by the Centre for Responsive Politics in the US to be one of the largest donors in the US to “super pacs” that support conservative policies and candidates, as well as donating millions of dollars directly to individual Republican candidates.

Mr Yass donated almost $25 million (€20.62 million) to Republican superpacs (political action committees) during the most recent US election cycle, and has been a major donor to the Club for Growth, a superpac that in turns has donated money to Republican candidates, including Republicans who have supported President Donald Trump’s false claims that the recent election was rigged.

The politicians who received support from the Club for Growth include senators Josh Hawley and Ted Cruz, who have been prominent supporters of President Trump’s claims.

However, a person who did not wish to speak on the record, but said he was familiar with the views of Mr Yass, said the Club for Growth supported pro-business, free market policies and candidates, and it was the club that decided which candidates to support.

Mr Yass had not been in contact with any legislators about the idea of contesting the election and the businessman “does not believe the election was stolen”, the person added.

A spokesman for Mr Yass said the businessman did not wish to comment.

Mr Yass is a member of the executive advisory council of the Cato Institute in Washington DC, an organisation that, according to its website, is “dedicated to the principles of individual liberty, limited government, free markets, and peace”.

The European headquarters of the international trading group he founded is based in Dublin.

The latest consolidated accounts for IFSC-based Susquehanna Europe Holdings and subsidiaries, show a profit of $155.4 million in 2019, during which year it had $240.7 million in trading income.

The Irish companies paid $22.2 million in corporation tax. During 2019, the holding company moved its principal establishment and effective place of management to Ireland from Luxembourg.

By way of a subsidiary, Liffeyview Property Holdings, the group owns its premises on Memorial Road in the IFSC, with the subsidiary paying rent of $8.5 million to an affiliate, according to the 2019 accounts.

The Susquehanna group is known for quantitative trading, which involves sophisticated mathematical models for frequent, short trades at high volumes.