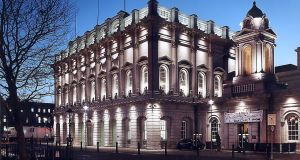 Heuston Station in Dublin, where CIÉ is considering putting 18 acres of land on the market

CIÉ is looking at putting 18 acres of land next to Heuston Station on the market in a deal that could yield it €326 million, according to the Sunday Independent, which reports that any development would ultimately include both commercial and residential elements. The hunt is currently on for advisers, it reports.

Sticking with property, Starwood Capital has reportedly pulled the plug on its planned sale of a portfolio of prime office developments around Dublin in what would have been one of the biggest property deals of the year. The Sunday Times speculates that the Budget 2020 increase in commercial stamp duty might have made some of the six reported suitors wary of meeting the €535 million guide price.

A number of broadband providers are preparing to challenge any signing of a deal to approve a bidder for the National Broadband Plan, the Sunday Business Post writes. The paper says that rivals will accuse the State of breaching state aid rules if it fails to take into consideration their own current and planned coverage of homes and businesses in parts of the State.

Paddy Power parent Flutter could announce the appointment of Morrisons supermarket board chief Andrew Higginson as its new chairman in succession to Gary McGann as early as its annual meeting of shareholders next May, the Sunday Times writes. If Higginson, a current non-executive director at Flutter, does take over, it would be the first time neither the chairman nor the chief executive of the group was Irish.

The paper also reports that British property group Henderson Park, which is buying Green Reit in a €1.34 billion deal could break it up and sell off its property assets within five years, citing a funder of the deal.

Kingspan, the listed Cavan building material group is said to be in the running to buy Luxembourg inflation foam company Armacell, which has been on the market since the summer with a guide price of €1.5 billion. Armacell’s products have been used on the international space station among other projects, the Sunday Business Post writes.

Draper Esprit, the Irish venture capital firm listed in Dublin and London, has got a seal of approval from the Sunday Telegraph’s Questor stock-picking column which says its approach of investing in unlisted early-stage companies appears to be paying off.