Coveney in the eye of a storm over crashing milk prices 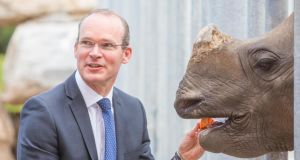 Simon Coveney is also getting it in the neck for over-hyping the potential of the US beef market. Photograph: Darragh Kane

Dairy farmers have spent the last two years ramping up production ahead of the ending of milk quotas. Egged on by Government, they’ve expanded herd numbers and taken on more debt like never before.

The prize was meant to be a front-row seat in the great white gold rush – a global dairy boom with China at its centre.

However, less than four months in and the industry finds itself on the wrong side of the worst slump in a decade.

A glut in production, weaker-than-expected Chinese demand and the Russian import ban have combined to create a perfect storm.

Crashing prices have eroded margins to the point that many farmers are now selling milk to processors at a loss. The Irish Creamery Milk Suppliers’ Association is predicting incomes swing of up to €40,000 between this year and last.

Now Minister for Agriculture Simon Coveney, once so keen to shed the shackles of EU protectionism, wants Brussels to step back in and raise its intervention price for milk.

However, his former Cabinet colleague Phil Hogan, who holds the EU’s agricultural brief, is not for moving, insisting farmers need to be weaned off supports. All of which is proving a major a headache for the minister and his Fine Gael party who find themselves gearing up for an election amid a full-blown crisis in rural Ireland, their electoral heartland.

Coveney is also getting it in the neck for over-hyping the potential of the US beef market. Announcing the re-opening of the market back in January, he predicted the US could take up to 20,000 tonnes of Irish beef, worth €100 million, this year alone.

However, half-year figures from the CSO suggest only 31 tonnes, worth a paltry €194,000, has been shipped so far.

This week’s global dairy market auction did provide some cause for optimism for beleaguered dairy farmers with prices rising for the first time in six months, which some observers suggested was a bottoming out of markets.

The mood was further cheered by a more bullish outlook for the sector from the chief of New Zealand’s Fonterra, the world’s biggest milk supplier.

Nonetheless, Coveney is undoubtedly not where he thought he’d be six months ago.