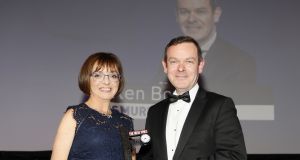 Ken Bowles, chief financial officer at Smurfit Kappa, has been named CFO of the year at The Irish Times Business Awards in Dublin.

Mr Bowles, who joined the paper and packaging giant back in 1994, has helped steer the company through what has been a busy period of late.

The group produced a record set of results in February with earnings surging 25 per cent to €1.545 billion. The strong performance coincided International Paper’s unwanted €9 billion takeover approach and the closing of its €460 million takeover of Dutch company Reparency.

It hasn’t all been good times for Smurfit as its Venezuelan operations were seized by the Caracas government amid complaints about prices the company was charging for its products. While it ultimately wrote down €60 million of net assets, the group is fighting for compensation.

While all this was going on, Mr Bowles - who joined Smurfit in 1994 - helped sell €400 million worth of bonds just days after agreeing a €1.35 billion credit line.

Other nominees for the CFO of the Year award were Eamonn Crowley of Permanent TSB, Les Wood of Tullow Oil and Marie Joyce of NTR.

Other awards being distributed at the awards ceremony at the Mansion House in Dublin on Wednesday include business person of the year, company of the year, deal of the year, local enterprise of the year and distinguished leader in business for 2019.