The Irish Times view on Budget 2020: preparing for the worst 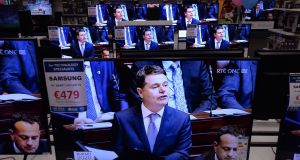 Minister for Finance Paschal Donohoe had the difficult task of framing a package against an uncertain background, with no clarity on whether a no-deal Brexit will happen, or if so when. Photograph: Alan Betson

The risk of a no-deal Brexit is dominating our political and economic life and it is thus no surprise that it was the theme of this year’s Budget. Minister for Finance Paschal Donohoe had the difficult task of framing a package against the background of extraordinary uncertainty, with no clarity on whether Britian will depart the EU without a deal and, if so, when. Against this backdrop he made the decision to plan for the worst while continuing to hope for the best.

This was the right thing to do. Brexit uncertainty may drag on and, as a result, there was no point in delaying the budget. And presenting it on the basis that the UK would leave in an agreed fashion would clearly have been ludicrous given the current mood music between London and Brussels. However, taking the assumption of a no-deal Brexit as the central expectation leaves the Budget sums up in the air.

If a no-deal happens,the budget will be in deficit. If not, it will remain in surplus. One outcome requires us to borrow an extra €1 billion on the international markets to bail out companies in affected sectors. The other means we are more likely to be worried about economic overheating. At least both of these outcomes pointed towards the need for caution. And even though it is the last budget before a general election, the Government had no choice but to adopt this approach.

The difficulty of planning for a no-deal Brexit is that its impact is so difficult to predict, particularly in the short term. It is appropriate that significant sums have been set aside to try to limit the damage – and limitation is the best we can hope for – though inevitably difficult to judge how money is best spent. The Government has made a start in outlining what it would do, but it needs to quickly develop a detailed plan and agree EU state-aid clearance. If a no-deal does hit, time will be of the essence.

Elsewhere there were two themes worth noting. The first was a start to the necessary process of increasing the carbon tax and a welcome commitment to continuing to do so. That said, this is only a tentative first step which will not, in itself, have much impact on people’s behaviour. Notwithstanding the commitment of many to the concept, it will be a huge political job to plot a policy course in this area.

Meanwhile, it is clear that there is continuing upward pressure on spending across-the-board. This is partly a feature of our politics – when money is there, people try to spend it. It also reflects pressure to increase investment and improve public services. We need to hope that we avoid the worst Brexit outcome to enable a continuation of that necessary investment. But a crunch parallel issue is the need to secure maximum value for money from extra resources. Delivery will be one of the key themes of the election to come.