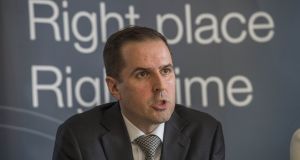 Minister for Finance Paschal Donohoe has extended a special tax relief designed to attract overseas executives and companies to Ireland by a further two years until 2022, after a Government-commissioned report concluded that the benefits of the scheme continue to outweigh the cost.

Some 1,084 people employed in Ireland availed of tax relief under the so-called Special Assignee Relief Programme (Sarp) for foreign executives in 2017 – including eight individuals on salaries between €3 million and €10 million – resulted in a €28.1 million cost to the exchequer, according to the report, carried out by economic research firm Indecon.

The report concluded that the economic benefits of the scheme were 1.8 times greater than the cost. It noted that companies using Sarp paid €2.5 billion in corporation tax and €1.9 billion in pay-as-you-earn taxes in 2017.

The relief, introduced at the height of the financial crisis in 2012, initially provided relief from income tax on 30 per cent of salary between €75,000 and €500,000. While the upper limit was removed in Budget 2015, a cap was reinstated, at €1 million, from the start of this year.

The scheme was scheduled to run out at the end of next year, before Mr Donohoe’s decision to extend it.

The Minister has also extended to the end of 2022 a foreign earnings deduction (Fed) tax relief for Irish residents who spend some time working abroad.

“The review confirms that the policy rationale for the existence and continuation of both [Sarp and Fed] is strong,” he told the Dáil as he unveiled Budget 2020.

A submission from IDA Ireland to Indecon on Sarp said: “In general, the attraction of individuals with advanced skills and leadership experience, by reducing the tax cost of assigning these individuals to Irish-based operations, has been a valuable tool in our engagement with potential FDI target companies.”

Indecon recommended that Sarp be extended to 2025 and that the feasibility of enhanced relief for regions outside of Dublin should be examined.

“With full employment in Ireland and in the face of Brexit, we must recognise that many other countries have similar schemes in place and are competing for the best talent, so we need to make sure incentives like this are protected to maintain Ireland’s competitiveness and attractiveness as a place to work and do business,” said EY Ireland tax partner Michael Rooney.