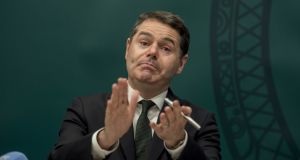 Minister for Finance Paschal Donohoe. The Government’s planned move to a €80 per tonne carbon tax is expected to net the exchequer €6bn

A major “shock” to Ireland’s corporation tax base could leave a €6 billion hole in the public finances, the Department of Finance has warned.

In its Budget 2020: Addressing Fiscal Vulnerabilities report, the department examines the sustainability of corporation tax here in light of the recent surge in receipts and the highly concentrated nature of the tax base.

Receipts from the business tax have more than doubled to €10 billion in the past five years, with nearly 50 per cent coming from just a handful of companies understood to include tech giants Apple, Google, Microsoft, Dell and Oracle.

The department’s report stress tests the public finances against three possible corporation tax scenarios. “While some may be extreme, a key lesson of the crisis is that so-called tail-risks – low probability but high impact shocks – materialise.”

The first and worst-case scenario involves corporation tax receipts reverting to 2014 levels over the course of two years, beginning in 2020. This could result in a permanent budgetary gap of €6 billion by 2021 relative to current expectations.

Depending on the source of the shock, other fiscal aggregates could also be affected, said the report. Income tax could be lower if the employment effects were large, VAT receipts could be affected by lower consumption and unemployment-related expenditure could be higher.

The direct budgetary impact, therefore, could be exacerbated by indirect or second-round effects.

The other scenarios where receipts revert to the long-run “norm” or receipts move more in line with a deglobalised measure of national income would involve a permanent revenue loss of €1 billion to €2 billion per annum.

“While it is not possible to be definitive regarding the sustainability of these receipts, simulations suggest that in the event of a shock to CT [corporation tax] receipts the impact on the public finances could be significant, with a structural gap between revenue and expenditure opening up that would necessitate correction.”

One option would involve ring-fencing a certain portion of “excess” receipts for investment in the so-called “rainy day fund”.

Another involves what it called “base-broadening” or rate increases elsewhere. An increase in the carbon tax would, for instance, increase its share of overall tax revenue while at the same time incentivising a reduction in fossil fuel usage.

The Government’s planned move to a €80 per tonne carbon tax is expected to net the exchequer €6 billion.

It also cited the Government’s recent moves to increase the commercial stamp duty rate and to return VAT rate on tourism and other activities to 13.5 per cent in Budget 2019 as successful “base-broadening” measures.

In his foreword to the report Minister for Finance Paschal Donohoe acknowledges the jump in corporate tax receipts, noting that around €1 in every €5 collected in tax was now paid by the corporate sector. “Even more striking is the fact that nearly half of all corporate tax receipts are paid by just 10 firms.”

Mr Donohoe said the Government was endeavouring to broaden the State’s tax base, citing the examples of the local property and sugar taxes and the return to the 13.5 per cent VAT rate on tourism activities.

He also highlighted the establishment of the “rainy day fund “as a fiscal safety buffer to help absorb inevitable future shocks to the economy.

Mr Donohoe also insisted the Government was prioritising debt reduction, and had committed to using windfall receipts – including those associated with the financial sector – for reducing public debt.