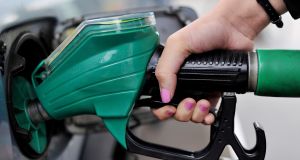 Ireland will not ‘move the dial on climate breakdown’ unless there are major changes to transport, farming and forestry, said Green Party leader Eamon Ryan. File photograph: Nick Ansell/PA Wire

A €6 increase in the carbon tax on all fossil fuels will not be enough to ensure that Ireland cuts carbon emissions quickly, Climate Change Advisory Council chairman Prof John FitzGerald has said.

Acknowledging the uncertainty caused by Brexit, Prof FitzGerald said the €6 per tonne carbon tax rise in Budget 2020 is “disappointing”, particularly since the advisory council had called for a €15 per tonne increase.

He said he would have accepted a move to enshrine in legislation an increase of €6 per tonne every year up to 2030 as this would send a signal that the country was shifting away from fossil fuels.

There was “relatively little else” in the budget beyond fuel allowance increases, some funding for retrofitting homes and €20 million to support Bord na Móna, which is getting out of peat harvesting.

Defending the measures, Minister for Climate Action and Environment Richard Bruton said carbon tax increases up to 2030 are pencilled in, which will raise a ring-fenced €6 billion fund for climate actions.

The budget proves that the Government is “acting now” on climate change, with significant increases in funding to upgrade homes and ensure a doubling of electric vehicles sales.

Twenty-four thousand homes and businesses will be upgraded by a €146 million fund, said the Minister, adding that the measures recognised that everybody needs to be on board, including those in rural areas.

Fianna Fáil’s Timmy Dooley said his party has been instrumental in ensuring that carbon tax revenues are ring-fenced to ensure that people at risk of fuel poverty are protected.

In addition, the communities affected by the ending of peat and coal-fired electricity generation must be helped to find new jobs, and the public encouraged to live more climate-friendly lives.

Green Party leader Eamon Ryan said the Government missed the chance to increase carbon tax in ways that would change Ireland’s habits and yet help the poorest people.

“This is a status-quo budget from a status-quo Government,” said Mr Ryan. “When it comes to the big spending decisions, all it does is tread water.”

Ireland will not “move the dial on climate breakdown” unless there are major changes to transport, farming and forestry, and without large and sustained investments in building better and warmer homes.

Meanwhile, the Environmental Pillar, a coalition of non-governmental organisations, said it was “deeply disappointed” by the carbon tax increase, saying the €6 rise “will be ineffective and could be counter-productive”.