Analysis: The increase of €6 per tonne risks being ineffective or counterproductive 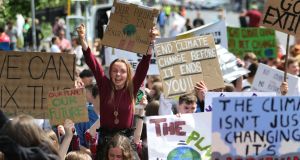 ‘There is growing public acceptance of the need for more radical measures on the road to decarbonisation’. File photograph: Nick Bradshaw/The Irish Times

In spite of a pre-Budget tizzy about carbon taxes, the scale of increase announced, less than 2 cent per litre of diesel or petrol for instance, is so small that it is on a par with routine price hikes at the pump triggered by market fluctuations. And they usually go unnoticed.

Applying the increase of €6 per tonne on top of the current tax level of €20 per tonne of CO2 every year for the next decade will at least reach the level committed to in the all-party report on climate action (€80 per tonne by 2030), which has been endorsed in the Government’s own plan.

The measure is so marginal it risks being ineffective or even counterproductive because it is clearly not enough to effect a behavioural shift that would tilt the balance away from fossil fuels to renewables. It allows opposition to the tax in rural areas to take root and certainly does not resonate with the Government’s declaration of “a climate emergency” in Ireland.

Notwithstanding the risk of some political fallout, there is growing public acceptance of the need for more radical measures on the road to decarbonisation.

What’s more, delay on action and robust carbon pricing means when what’s needed is eventually pursued, it will be more costly. Separately, the likely rise in Irish carbon emissions up to 2025 will bring yearly penalties at a time when the economy is likely to be under pressure.

An ESRI study released on Tuesday finds a carbon tax could have some adverse impacts on GDP; inequality and household income. However, “the impact is limited and could be reduced by using a well-designed revenue recycling scheme”. The results belie repeated claims of People Before Profit and Sinn Féin, who continue to insist carbon taxes do not work.

Minister for Climate Action Richard Bruton insists the climate measures announced protect the most vulnerable from rising carbon taxes while still putting the State on the road to sustainability and climate resilience.

Protection is mainly by way of welfare supports, including fuel allowance increases, that do not address ongoing climate vulnerability, such as grossly inefficient heating in social housing. Some minor funding has been announced to try to address this issue by way of “energy poverty efficiency upgrades”.

While Budget 2020 is a holding one, given huge uncertainty over Brexit, the way forward on climate change is already charted under the Government’s climate action plan. The fundamental redirection of the economy, State agencies and the business of government is yet to happen, though.

Demanding five-yearly carbon budgets will kick in from 2021, with every sector told what its new emission limits will be.

On other climate measures, the Budget includes some moves to help ensure climate resilience for what Donohoe called “our defining challenge” beyond Brexit. The reality, however, is the funding is modest given the scale of the task.

The additional funding of €384 million for the Department of Transport is a stand-out figure to cover a range of climate measures including investment in the rural transport network (with a portion of carbon tax revenues), sustainable mobility projects, electric vehicle (EV) charging infrastructure and maintaining (though not increasing) supports for purchasing EVs. Measures in place are working with EV numbers set to double this year and next.

The move to a just transition is also notable. Some €30 million raised from the carbon tax increase is set to be reinvested in a fund that will support the midlands where Bord na Móna and ESB power stations are significant employers.

Other revenues will be reinvested in climate-friendly policies, including rural transport, greenways and walkways. A new nitrogen oxide charge on new and imported petrol and diesel cars is primarily aimed at addressing marketplace distortions on price but is also good for the environment.

The bottom line remains emissions, which are still on the wrong trajectory. Ireland has yet to get on a course with the prospect of halting their rise. Budget 2020 is helpful but does not give visibility on that essential requirement.