Budget 2020: Few winners and many losers

How did our families fare this year? 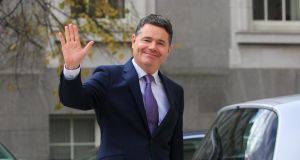 Minister for Finance Paschal Donohoe failed to adjust any of the personal tax bands or credits (bar two) to account for inflation, a process known as ‘indexation’. Photograph: Gareth Chaney/Collins

There were few winners in this year’s budget – and many losers – given the Government’s reluctance to implement any reductions in personal income tax.

Indeed of the eight budget families we are considering this year, just two will pay less tax come next January. And while the other six families will continue to pay tax at the same rate on their incomes, once annual wage increases kick in next year, they will likely find that they’re paying more tax on their income. This is because Minister for Finance Paschal Donohoe failed to adjust any of the personal tax bands or credits (bar two) to account for inflation, a process known as “indexation”.

This is the situation facing our single public sector worker Tom. With earnings of €36,000 a year, he is on the precipice of the higher rate tax band; and any increase in his wages means he will end up paying tax at 40 per cent on even more of his income, due to the failure to raise the band from €35,300.

Nonetheless, we do have two “winners” among our budget families this year. First of all, our dual-income family, Mark and Linda, who stand to benefit from the increase in the earned income credit for the self-employed, up from €1,350 to €1,500 come January. It means that they will pay €3 less tax a week next year. Not enough to mitigate their fears about what Brexit might mean for their business, but better than nothing perhaps.

As Casey notes, while the increase in this credit “is a step in the right direction” it still falls short of aligning with the €1,650 tax credit available to PAYE workers. “Given the previous commitment to align the two credits by 2018, this will be a source of continuing frustration for the self-employed,” she says.

Similarly, our single-income family, on earnings of €57,500 a year, will also benefit from an increase in a tax credit, this time around the home carer credit, which is set to increase from €1,500 to €1,600, thus saving our family almost €2 a week or €100 a year in tax. So how did everyone else fare?

Mark is married, in his early 50s, and lives in Louth with his wife Linda. Mark is a self-employed hotelier. Linda has a part-time job as a beautician and earns a salary of € 23,000.

They have four children, one of whom still lives at home. Mark’s annual income over the last number of years was €152,000, bringing their combined income to €175,000.

Mark and Linda are worried about what Brexit might mean for the hotel they own in Co Louth but are happy to see a focus on tourism specific initiatives, as part of a Brexit package, in the budget. Mark is concerned regarding the 0.1 per cent increase in the National Training Fund levy and how this will impact his business costs.

The increase in the earned income tax credit is welcomed by Mark.

Tom is a single 27-year old who lives and works in North Co Dublin, where he is a primary school teacher. Tom earns €36,000 per annum.

He is paying €800 for a two-bed apartment he shares with a friend. However, he would like to get on the property ladder in the near future and is hoping to use the help-to-buy scheme to help them get his deposit together. He is relieved to see that the scheme has been extended and believes this will help him greatly in the purchase of his first home.

Tom was hoping to see an increase in the standard rate band such that he would not pay any tax at the 40 per cent rate. As no such change was announced Tom will continue to pay tax at 40 per cent on a portion of his income. Compared to 2009, Tom’s net monthly income for 2020 remains unchanged at €2,465. In addition, Tom is very disappointed to see that the price of cigarettes will be increasing.

Leslie and Kitty are married and living in Cork. They own their family home having paid off their mortgage. Leslie and Kitty are in their late 70s. Leslie receives an occupational pension of €22,000. along with the State contributory pension and deposit interest. Kitty also receives the State contributory pension, bringing their total income up to €48,000 a year.

Leslie and Kitty’s combined net monthly income in 2020 is €3,765. If they had the same level of income and their circumstances were the same in 2009 their net income would have been €3,853, representing a decrease of €88.

Ellen & Joan are in their mid-thirties. They live in Kilkenny in a four-bed semi-detached house. They have two children, aged 11 and 5. Ellen gave up her job 10 years ago when their son was born so she could mind the baby and hasn’t gone back to work. Joan returned to work full-time in a tech company. Her annual income is €47,500.

They have boosted their income by €10,000 a year thanks to the rent-a-room scheme. This is within the current tax-free limits so they receive this amount, tax free, on top of Joan’s salary.

They are relieved that no changes have been made to the rent-a-room scheme as this would have an impact on their tax-free income. They were also very pleased to see an increase in the home-carer credit, as Ellen stays at home to mind their children.

Rebecca is a 30-year-old hairdresser from Kildare. She works full-time and moved out of her family home in 2019 to rent a one-bedroom apartment. Her annual earnings are €22,000 per annum.

Rebecca is quite disappointed to see no change in the rate of USC and no positive impact in the amount of her net monthly income for 2020. Rebecca notes that her net monthly income remains the same as that in 2019 at €1,643 and her income is still not back to what it would have been in 2009 (€ 1,720), had she earned the same level of income at the time.

Rebecca is happy to see that efforts are being made to combat rising rents but she does not believe this will have any impact on the high rent she is currently paying.

Amie is a single mother in her late thirties. She lives in Galway with her son Eoin, aged five. Amie works as laboratory supervisor and earns € 30,000 per year.

Mary is a 79-year-old pensioner with an income of €18,000. Shortly after the death of her husband in 2012 ,Mary moved from Wicklow to Laois to be closer to her daughter, Lisa, and grandson, Jack.

Mary is pleased to see the announcement of a 2019 Christmas bonus. Although there were no increases to the State pension Mary is happy that she will benefit from a €5 increase in the living-alone allowance.

Thinking about her grandson Jack, Mary was also happy to see an extension of the help-to-buy scheme and hopes that this will allow Jack to purchase his first home.

Given the value of their home, Frank is pleased to see no changes to local property tax although he is disappointed to see no increase in child benefit.