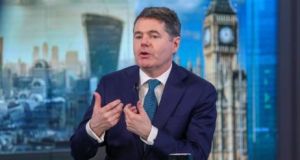 Getting set for Brexit: Paschal Donohoe has earmarked €1.2 billion to prepare for Brexit with just three weeks to go until the UK is due to leave the EU. File photograph: Getty

A Brexit preparation package valued at €1.2 billion has been announced by Minister for Finance Paschal Donohoe.

This will be in addition to funding that will come from the European Union to help the State deal with the UK’s departure from the bloc.

Minister for Agriculture Michael Creed raised the possibility of the EU providing “very significant” financial support to the State in addition to the funds being allocated by the Government to protect against Brexit.

The Government had “deliberately” not put a figure on how much it might receive from Brussels but said it would be “as ambitious as possible” when securing “very significant EU funding” to “augment” the budget.

“This is a very substantial firewall for us to protect the most significant indigenous industry - the ag-food and fisheries - and if more is needed, it will be available,” he told reporters, referring to contingency plan.

Mr Donohoe announced the budgetary measures with just three weeks to go until the current October 31st departure date with the Government attempting to brace the public finances for a development that could result in tens of thousands of job losses.

“This is a budget without precedent … a budget that has been developed in the shadow of Brexit,” the Minister told the Dáil in his budget speech.

He said a no-deal Brexit had become the Government’s “central assumption” but that. “This does not mean that no-deal is inevitable, but equally we stand ready if it does happen.”

Mr Donohoe said a no-deal Brexit would be “very challenging for our country” but that it was “a challenge that Ireland has the measure of”.

He said the UK crashing out of the EU would slow economic growth, but that the Government still expected an additional 19,000 jobs to be added next year and for more tax revenues to be collected.

Should the UK exit the EU without a deal, he said the Government would provide €650 million to support the agriculture, enterprise and tourism sectors and “the most affected citizens and regions”.

The Government plans to deploy €220 million immediately in the event of a no-deal Brexit, while €110 million will be provided for enterprises in the first wave of funding for affected businesses.

Plans to put a further €500 million into the State’s ‘rainy day fund’ next year will be abandoned if the economic impact of a no-deal exit is “more severe than forecast”.

Among the measures announced by Mr Donohoe are a €110 million contingency fund to be administered by the Department of Agriculture in the event of a crash-out Brexit, with first priority being given to the beef farmers and the fishing industry – the two sectors that would be most affected.

Some €85 million of this fund will go to beef farmers and €14 million to fisheries, along with €6 million to the livestock and mushroom sectors and €5 million for the food and drinks sector. Some €40 million will be provided to the tourism industry – another sector that will be badly affected.

Mr Donohoe said the balance of the €390 million in Brexit contingency funding will be determined at at later date to help “our farmers, our businesses and our citizens”.

Tánaiste Simon Coveney described the Budget as a “Brexit budget” that would be used “to protect Ireland from the worst effects” of a no-deal exit. He said that it was “new money but it is borrowed money,” though he hoped that the €1 billion-plus would not be needed as he still believed “a Brexit deal is possible”.

“I hope to be able to tell Paschal Donohoe to take back the money because it’s not needed, because we have an orderly and managed Brexit,” he told a press conference, sitting alongside five other Ministers.

Mr Coveney said the funding package to deal with Brexit was “not inclusive” of any financial support that would come from the EU in a no-deal scenario, “which could also be quite significant”.

The Tanáiste broke down the overall Brexit package as a €650 million no-deal contingency fund to help agriculture, business and tourism, €410 million for unemployment supports and €160 million in Brexit compliance costs, in addition to €240 million already being spent on Brexit preparedness.

“If you add all of that up, you are talking to close to €1.5 billion of money in this budget for next year, some of it new that will only be triggered if a no-deal happens,” he said.