Those who are self-employed or earning in excess of €70,000 are on their own 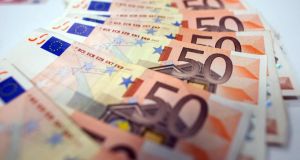 Anyone who earns €70,000 or more (or who merely aspires one day to earn that much) is on their own. Photo: Bloomberg

Some of the clearest messages of the budget were, amongst other things, deeply cynical. Anyone who earns €70,000 or more (or who merely aspires one day to earn that much) is on their own. As is anyone who is self-employed. The political calculation that allows Fine Gael to abandon this part of the electorate is where the cynicism is revealed. The government can still expect loyalty from higher earners and the self employed because the alternatives are so much worse: vote for us and we will merely torture you: the opposition, if given power, will seek to bury you.

A self employed person earning €100,000 a year now faces a USC tax rate that is almost the same as the maximum total rate of tax paid by any corporation that graces Ireland with its presence. That self-employed person, unlike the corporation, also faces a 40 per cent marginal income tax rate, not to mention PRSI. And one of the most glaringly inane parts of the tax code, the differential between PAYE and self-employed tax rates is, it seems, not worth mentioning, let alone addressing.

Commentators cut the government some slack with the argument that political demands must trump economic rationality. But that does not mean we should ignore the economic consequences of the budget. In the end, they will be of much greater significance than any short term political gains that may, or may not, accrue to the coalition. The aspiring and entrepreneurial sections of the Irish economy will now absorb and react to budget’s message: you are there to be plucked.

It is a curious state of affairs given that jobs growth is stated to be the main aim of policy: the majority of people in the private sector work for small Irish firms, not US multinationals. Employment growth, if it is to be sustained, can only come from a thriving entrepreneurial culture. Those who earn €70,000 a year or more pay the vast bulk of income taxes. This is, in more ways than one, quite an important group of people.

When we do not value aspiration or do something practical (as opposed to the usual empty rhetoric) to encourage entrepreneurs we should not be surprised by what happens next. All of those initiatives that are launched on a regular basis to encourage SME growth, to foster entrepreneurship, should be seen for what they are. As always, watch what politicians do, not what they say. And until they do something about taxation, nothing else really counts.

That point about employment by small private sector firms also reveals a potential flaw in the political calculation. While the votes of Irish entrepreneurs might not excite politicians - there aren’t enough self-employed to matter - the number of people employed by the SME sector does amount to a serious chunk of electoral change. The harsh lessons being doled out to their employers will soon enough get through to the rather large number of people who actually work in smaller businesses.