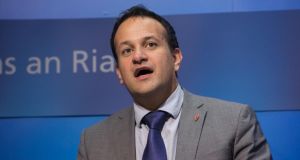 The Department of Health has denied it has been left with a €460 million “black hole” following Budget 2015, and says the spending allocation given to Minister Leo Varadkar by Minister for Public Expenditure Brendan Howlin is “realistic”.

Mr Fleming has questioned these figures and said “the Government had clearly learned nothing from the botched figures for €130 million in medical card ‘probity’ in last year’s budget”.

The budget given to the department for 2014 was in the order of €12.7 billion but Mr Varadkar has already said a supplementary estimate of more than €500 million will be needed, although he has declined to specify how much.

For 2015, Mr Varadkar sought that the supplementary estimate be added to the core budget, but only €300 million of this will come from direct exchequer funding.

The intention is the remaining money will come from the €460 million worth of measures highlighted by Mr Fleming.

Speaking in the Dáil yesterday, Mr Varadkar said, “these measures combined will allow us to develop a HSE service plan with in excess of €750 million more to spend on services than we had this time last year.”

The Minister added: “It is of course correct to point out that this does not take account of service overruns of about €500 million this year, which will recur next year. But, no matter how you calculate it, it is an increase in funding for health services.”

He said the income-generation measures, worth €330 million, “relate principally to quicker settlement of hospital bills by health insurers and receipts from the UK authorities for the treatment by the Irish health services of persons covered by the UK’s national insurance system”.

An estimated €200 million is owed by private health insurers.

The money owed has been consistently highlighted by the Public Accounts Committee, and there is some scepticism as to how quickly it will be paid.

The €130 million of savings will come from “specific” items identified by the department and the Health Service Executive “in the areas of procurement, drug costs, agency costs, clinical audit and special investigation”, according to Mr Varadkar.