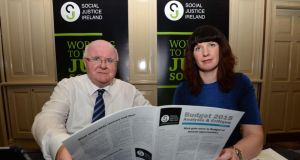 The distribution of positive measures in the budget was dramatically skewed in favour of the better off and has widened the rich-poor gap in the State, Social Justice Ireland has said.

Seán Healy, the advocacy group’s director, said the policies announced ensured this was the “fourth regressive budget in a row” and that the gap in disposable income between a single unemployed person and someone on €50,000 a year had widened by €499 as a result.

Those who took the biggest hit during the crisis were left behind again as priority was given to reducing the top income tax rate, Fr Healy said, adding that the difficulties faced by low income households would be compounded by the roll-out of water charges.

Fr Healy said a lot of “guff” had been spoken in the lead up to the budget about higher earners paying a 52 per cent combined tax rate on their incomes and that the effective rate next year for a single person on €120,000 would be 42.3 per cent.

He said a decision to provide €95 million in corporate tax breaks was “bizarre” but he welcomed the decision to close the controversial “double Irish” tax planning loophole.

The organisation said it was concerned that the State’s low overall tax-take was not sustainable. It said that if policies signalled were followed over the next four years tax receipts would rise from €56.8 billion to €65.9 billion but that, with growth expected, the contribution of tax to GDP would fall from 30.9 per cent this year to 29.3 per cent in 2018.

It recommends that policies be pursued that would increase Ireland’s tax take to 34.9 per cent of GDP, which the EU statistics agency still considers a “low tax” economy, as this would raise revenue that would no longer leave the State “incapable of adequately supporting necessary economic, social and infrastructural requirements”.

Michelle Murphy, the organisation’s research and policy analyst, said it was regrettable that primary social welfare rates were not increased as average prices had increased by some 5.5 per cent since 2010.

She said the Back to Work Family Dividend - a €29.80 weekly payment for people with children who were returning to work - was inadequate as it failed to address the cost of childcare, which effectively doubled the rate of tax on earnings.

Fr Healy said the budget did have some positives such as the €5 increase in child benefit and evidence of multi-year planning in areas such as health and housing which was necessary as big issues were seldom addressed in the lifetime of one government.

He welcomed the fact that “at long, long last” the Government was facing up to the crisis in social housing but said the proposed delivery of 30,000 units would fall well short of what was needed by leaving at least 60,000 on waiting lists.