Volatility a threat to growth prospects 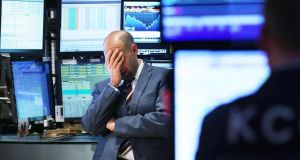 A trader on the floor of the New York Stock Exchange this week. As fears from Ebola and a global slowdown spread, stocks plunged. Photograph: Getty Images

Is the horror show back? The return of turmoil to global markets serves as a sharp reminder of the disruption that brought the Irish economy to the brink of collapse. As the Government prepares to cut income tax next year after ever-deepening retrenchment, it all serves to underscore its heavy exposure to rough conditions in the outside world.

If the decision to choose an expansionary budget was an act of acute political necessity, critics still see risk in the strategy. They have now been joined by Moody’s, which cast the 2015 fiscal plan as a “missed opportunity” to further reduce Ireland’s elevated debt levels.

Although the credit-rating agency does not doubt the Coalition will achieve its deficit target next year, it says the budget is credit negative. “Next year’s fiscal easing increases the risk that more challenging corrective measures may be necessary to meet future targets and, more problematically, leaves the country’s public finances more vulnerable to external shocks.”

It may be tempting here to recall the pitiful performance of all credit-rating agencies before the 2007 crisis, but that is not the point.

Moody’s issued its commentary on the budget yesterday amid uproar on markets. The root of volatility varies, and it’s far from clear that another international crisis is upon us. But investors have several anxieties, among them: mounting concern about slackening growth prospects for the global and euro zone economies; the Ebola emergency; geopolitical tension over Russia’s incursion in Ukraine; and further strain over the Islamic State rampage in Iraq and Syria. Markets have also been on a run of late and were due some kind of a correction. As central banks shut the tap on quantitative easing, easy money is no longer a given. It’s enough to make dear Ireland, squabbling still over the water charges, seem like a harbour of relative calm.

So what does it all mean for us?

The main concern must be the threat to growth, which is required at a healthy level in coming years to boost job creation and consolidate recovery in public finances.

However, new data on the retail and manufacturing sectors in the US have prompted concerns that the country’s recovery is losing its pep. It will take time to determine this definitively and by how much it impacts Ireland. Yet it is as well to note that Budget 2015 is predicated on 3.6 per cent. While some private analysts say that is too conservative, it is clear that growth forecasts can fall as well as rise.

Then there is the euro zone. The major economies here – Germany, France and Italy – are at a virtual standstill. As political bickering continues over what must be done to deal with that and by whom, the extent to which the European Central Bank is willing to step up its response remains in question.

Added into this mix are renewed worries about the fate of Greece, the source of the sovereign debt crisis and still struggling to stay afloat after five long years of trouble. The latest ructions centre on a lack of confidence in the Greek government’s effort to repeat Ireland’s clean bailout exit. Amid concern that the government could yet collapse and bring the leftist anti-bailout Syriza movement to power in Athens, the danger remains that contagion takes hold in Italy.

All of this follows two years of peace, in which the situation in the euro zone came to be seen as a chronic ongoing problem for long-term settlement rather than an immediate source of existential woe. European leaders stumbled for years from one crisis to the next so it would be unwise now to expect anything other than a piecemeal muddle-through strategy. If turmoil continues, however, any prospect of a return to solid growth in Europe will diminish the more it goes on.

None of which can be good for Ireland, although the economy is in better order now than at the outset of crisis. At that point, the overinflated banking system was a disaster waiting to happen – and disaster duly struck. Then the banks tipped the State over the edge. If the priority right now is growth, rocky markets don’t help. Whether the present volatility continues or peters out will be crucial.