Budget is a “missed opportunity” - Moody’s 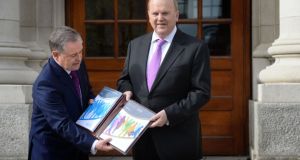 Budget 2015 represents a “missed opportunity” for the country to further reduce its elevated debt levels and leaves the Irish economy “more vulnerable to unexpected shocks”, ratings agency Moody’s said in a report today.

Noting that Ireland’s elevated debt levels “remain a key source of vulnerability” the ratings agency said the government opted to rely on growth, rather than the fiscal consolidation that the European Commission, the IMF and Ireland’s Fiscal Advisory Council recommended, to meet its targets.

While Moody’s said that it believes the Irish government will meet its deficit target again in 2015, next year’s fiscal easing “increases the risk that more challenging corrective measures may be necessary to meet future targets and more problematically, leaves the country’s public finances more vulnerable to unexpected shocks.”

Referring to the decision to remove the double Irish tax break, Moody’s said that the potential exit of foreign companies “poses a significant risk to Ireland’s growth and fiscal outlook”.

However, it does not expect that the phasing out of the scheme will result in a major exodus of multinational companies from Ireland, given that the government envisages other tax incentives to retain them, including a “knowledge development box” that will grant tax exemptions to companies developing new technology in the country.