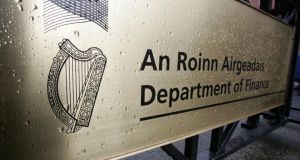 Minister for Finance Michael Noonan announced the new Strategic Banking Corporation of Ireland will be launched at the end of the month. Photograph: Frank Miller/The Irish Times

The new Strategic Banking Corporation of Ireland will “increase the availability of loans of longer duration coupled with more flexible conditions and potentially at lower cost” to SMEs, Minister for Finance Michael Noonan has said.

Mr Noonan said the body will be launched at the end of this month,

He added that Permanent TSB, which is 99.2 per cent owned by the State, would “shortly recommence actively lending to the SME sector” and has agreed to participate in the Credit Review Office process, which offers an appeal process to small businesses or farm borrowers who have had an application for credit of up to €3 million declined or reduced.

Ulster Bank, which is owned by Royal Bank of Scotland in the UK, is “actively considering making a similar commitment”, the minister added in his Budget speech.

The Irish Times has learned that PTSB has hired, an official with the National Asset Management Agency, to head up its SME activity. It plans to develop a position for owner managed enterprises (OME) with a roll-out next year.