Budget 2015 gets thumbs-up from business community 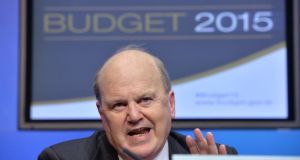 Minister for Finance Michael Noonan’s Budget has been warmly welcomed by business leaders, according to a new survey. Photograph: Alan Betson / The Irish Times

Business leaders have given a big thumbs-up to Budget 2015, according to a new survey which shows major support for the new measures introduced by Minister for Finance Michael Noonan in the Dáil.

Nearly three-quarters of business leaders surveyed by PwC on Wednesday said Budget 2015 would improve the outlook for the Irish economy.

The survey of more than 500 leading professionals said that despite the ending of the controversial “double Irish” tax arrangement that the Budget was supportive of foreign direct investment (FDI).

Business leaders largely agreed that the changes announced to the corporate residence rules demonstrated Ireland’s commitment to ensuring its taxation system was globally accepted as an “open, transparent, rules-based system which is fair and, most importantly, competitive.”

The study found that business leaders feel the greatest threats to business tax strategy are a revenue audit, EU tax developments and the outcome of the BEPS (Base Erosion Profit Shifting) process.

“The survey highlights that Budget 2015 sends clear messages of confidence and growth with a path for certainty ahead. The personal tax measures announced as part of the three-year plan should give a modest boost to the local economy. The corporate tax measures should ensure that the International companies based in Ireland will continue to do business from Ireland and that they will be joined by many new International companies,” said PwC’s head of tax Feargal O’Rourke.

Survey respondents also described the Budget as being job-friendly. Some 40 per cent of those surveyed by PwC said their organisation would likely increase headcount in the year ahead as a result of the Budget.