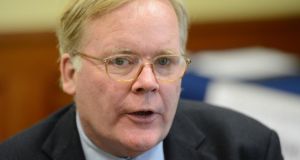 Austerity has not ended but is entering into a new phase after Budget 2015, a conference on the impact of Tuesday’s Budget heard today.

Michael Taft, economist with the Unite trade union, was addressing the conference hosted by the Free Legal Advice Centres (Flac). He said the first phase of austerity was coming to an end but had been “nominal”.

“It involved positive adjustments – expenditure reductions, tax increases. These were announced in actual Euros and cents. This amounted to over €30 billion. The second phase of austerity will be real.”

While austerity would lessen at first, public expenditure would not keep pace with inflation.

“Therefore the value of social transfers, public services and investment will be eroded,” said Mr Taft.

Tuesday’s Budget had been “significantly regressive”, he said.

Social protection rates had been be cut in real terms – given inflation. There had been tax cuts for many low- to average-income groups which would result in marginal gains but these would be wiped out by water charges. In contrast higher income groups, net of water charges, would gain, he said.

There was an erroneous assumption in Ireland that Government could only boost living standards by tax cuts.

“There is a narrow focus on euros and cents to promote individual consumption. In continental European countries, living standards are promoted through social solidarity and collective consumption.”

He said significant investment in public services, such as childcare, broadband and education, would be “economically beneficial and socially reinforcing”.

“In Ireland, social protection is seen as poverty amelioration – something for poor people that costs those in work (the squeezed middle). But in collective consumption everyone has a stake – contributing according to means and receiving according to need. This creates a social glue (solidarity) that is the stuff of community building,” said Mr Taft.

The conference was called to discuss a survey of 39 NGOs on the impact of Budget 2015. It found the majority believed the Budget has not gone “far enough to restore or protect basic human rights” which were damaged during six years of cuts.

The 39 NGOs however welcomed a greater than requested investment in social housing (€2.2 billion) as well as well as the €5 per month increase in Child Benefit, bringing it to €135 per month from January .

The majority said too little had been done to address the damage done since 2008.

In particular they were unhappy there had been no increase in the “provision of badly needed publicly subsidised childcare”, as well as “no increase in overall social welfare payments”.

Can I see my father’s previous wills? 05:50
Stocktake: Stocks can stay expensive for a long, long time 05:40
Stocktake: Are markets too dependent on Trump’s Maga stocks? 05:40
Revolut valued at $5.5bn after latest fundraising 05:33
Kingspan and Greencore executives sell almost €11m in shares 05:30

1 Bank leaked my loan request to family who tried to rip me off
2 Solar panels: How do they work - and are they worth it?
3 Boris Johnson's new immigration regime will damage much more than industry
4 Ryanair and Aer Lingus monitor impact of coronavirus on travel to Italy
5 Bank of Ireland to sell distressed mortgages and cut costs as profits fall
6 UK lays down red line for Brexit trade talks
7 Stocktake: Are markets too dependent on Trump’s Maga stocks?
8 McEvaddy brothers vow to continue to back Irish aviation business
9 Kingspan and Greencore executives sell almost €11m in shares
10 Over $12m from sale of Walford handed over in Sean Dunne bankruptcy case
Real news has value SUBSCRIBE