The Start-up Summit: Six smart ways to keep your business plan on track

This was the first of four regional events designed to fill the last four places on the 2017 Academy which will see the Summit in Cork, Belfast and Dublin over the next few weeks 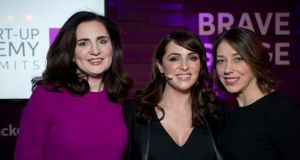 One of Ireland’s most creative cities, Galway, was the venue for the first AIB Start-up Academy Summit – an event that saw Emer Cooney’s business Hydrasure win a place on this year’s eight-week Academy programme. Cooney’s Wicklow-based company provides smart-stabling solutions to the equine and agricultural industries and use technology to improve animal health, welfare and performance.

This was the first of four regional events designed to fill the last four places on the 2017 Academy which will see the summit travel to Cork, Dublin and Belfast over the next few weeks.

In a closely-judged contest Hydrasure won out against Ciara Garvan’s WorkJuggle, an online platform connecting highly-skilled professionals with companies that need their skills on a flexible basis.

Hosted by Gráinne Seoige, the pitching contest was one of the highlights of the summit that included expert input from Pádraig Ó Céidigh, senator and founder of Aer Arann; Aoibheann McNamara, owner of ArdBia, Galway and co-founder of The Tweed Project; Padraic Joyce, ex-Galway GAA footballer and founder of PJ Personnel and David Cunningham, CEO, Lean Start Up Summits in Europe and founding director of the Portershed.

Here are six great lessons we took from the event:

1. Be true to yourself

It’s important to be true to yourself and recognice that "colouring inside the lines" of a business plan is not for everybody, says Aoibheann McNamara owner of ArdBia, Galway and co-founder of The Tweed Project. “I am quite unconventional in my approach to almost anything so I don’t follow any sort of business format. I don’t have a whole background in business, I have people in place now who look after that which is very handy so I just get on with the creative stuff and I enjoy it. You don’t have to have studied business, you just need to believe in what you’re doing,” said McNamara.

2. Be kind in business

Broadcaster and recent start-up founder Gráinne Seoige was keen to soak up as much of the mentorship and support as she could at the event for her business, Grace Diamonds. Remember to give and be kind in business, she says. “I was lucky to be a part of the Pendulum Summit in Dublin last week and one of the key messages we were encouraged to adopt in business, and indeed in life, was to have an attitude of walking up to people and saying “How can I help?” because the people who help other people the most also tend to be the most successful in business, so it lifts all boats.”

Resilience is a fundamental attribute in business and David Murphy from the Irish Times who was a judge said he could see that both Hydrasure and WorkJuggle showed resilience in learning from the feedback from their initial pitches and coming back to pitch again. “I think both companies are very brave to pitch (again) and I thought they did incredibly well. We gave them a little bit of feedback after the first round which they both took on board. Resilience is incredibly important for any start-up or any business and you could see that (for both companies) this evening.”

4. It’s not for everyone

It’s difficult to start a business but there are resources and supports out there, says David Cunningham, CEO, Lean Start-Up Summits in Europe and founding director of the Portershed. “I think we need to encourage start-ups but we need to not just have a really glamorous event and then say “start-ups are great” and then leave town. What the guys have done here and what we’ve put together in terms of structure in the Portershed is, yes, try entrepreneurship but there’s the Start-up Academy, there’s the Portershed, there’s great supports here but we do need to caution, this is hard work, it’s not for everyone but if you really have the passion to go and do it, there are people that can help.”

Having a mentor and trusted advisor to talk to about the issues facing your business is invaluable says Pádraig Ó Céidigh, Senator and founder of Aer Arann. “A mentor is someone you can really get close to and you can trust and talk to. And by talking to them it helps you rationalise out your mind in relation to where you’re at and where you’re going.”

6. Learn from your mistakes

You can learn as much from your failures in business as your wins says ex-Galway footballer Padraic Joyce who now runs PJ Personnel. The highs and lows of his sporting days helped him immensely in business. “You have to be a teammate and you also have to be an individual as well. You get knocks, you don’t win All-Irelands every year. I played for Galway for 14 years and we won two in 14 years so I’ve had more knocks than I had successes but from your defeats, you sometimes learn more.”

The judges for the event were Dr John Breslin, lecturer in NUIG and co-founder of Galway City Innovation District, Evin Cusack, Head of AIB Galway, David Murphy from The Irish Times and Mary Rodgers, Innovation Community Manager with the Portershed.

Hydrasure will now go forward to join 10 finalists that were chosen last week from a shortlist of 22 companies from across Ireland. This is one step closer for these start-up companies to winning the Academy’s coveted top prize, which is worth €200,000.

Three further summits will take place in Cork, Dublin and Belfast over the next few weeks with expert speakers and pitches from businesses who have one last chance to win one of the three remaining places on this year’s Start-up Academy programme.

The eight-week Academy will begin next month in The Irish Times and the finalists will make a final pitch to win the highly coveted prize at a final event in April.

To find out more visit www.aibstartupacademy.com