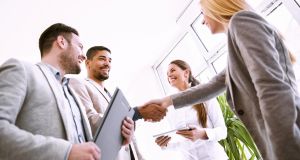 New contacts: Nobody is going to know what you do unless you tell them, so networking is key to getting the message of your business out there.

The term “networking” might conjure up a vision of power suits, meaty handshakes, a confetti of business cards and awkward introductions. And, truth be told, it’s probably still the case at a lot of organised events. However, networking is much more: it’s how you interact with and connect with people in person and online every day, and each connection has the potential to grow your business.

Orla Battersby, manager of the high potential start-up division at Enterprise Ireland, says some people think networking is simply attending an all-day event, but this can use up valuable time for a start-up. “You could be at something morning, noon and night and gain very little from it. From our perspective, there is so much more that entrepreneurs need to be doing and time is their most precious commodity.

“Networking is really important for a start-up among peers and with people who may be able to advise them, because there is lots of help out there. But they have to be choosy and focused about how they use their time, who they meet and where they want to go,” said Battersby.

Irish start-ups can avail of a lot of opportunities for networking through organised business networking events and less formal get-togethers or even a cup of coffee. Local Enterprise Offices, chambers of commerce, business groups and associations and certain trade organisations all run networking events for businesses, and other events such as the National Women in Business Networking Event are run by Local Enterprise Offices across the country.

You can also network online. Samantha Kelly is a social media strategist, trainer and speaker who operates Tweeting Goddess and founded the Social Media Summit Ireland and co-founded the Women’s Inspire Network. She said that online networking can be useful in making connections for those who are uncomfortable at networking events.

“Even though I’m not shy I found networking events very intimidating. I found myself thinking ‘Oh my God, what am I doing here?’ I just felt a little bit out of my depth and like a bit of a fraud but apparently that’s really common with people in business. It’s called ‘imposter syndrome’. Everyone in the room is probably feeling the exact same thing, they just look a bit more confident.”

“I found there was definitely a need to network in a different way so that’s why I started the hashtags #irishbizparty and #womensinspire that allowed people to network online and hide behind the computer. And then by the time we got to an offline event it was hugs not handshakes. A really nice way to ease into networking is to take part in Twitter chats and there are loads of different ones,” said Kelly.

Battersby says that employing a “fake it ‘til you make it” approach is a great strategy for those feeling overwhelmed or nervous networking. “It’s important to remember that nobody really likes networking, so it’s a case of getting into a conversation and talking about whatever everyone else is talking about rather than launch in with your pitch. Bide your time,” said Battersby.

Nobody is going to know what you do unless you tell them, so networking is key to getting the message of your business out there. Kelly advises start-ups to do their research before attending events so as not to spread themselves too thinly. Strategise on what your target is and who you want to meet. Ensure the introductions are made and, although it seems simple, don’t forget to have your professional business cards.

“Suss out who you want to talk to before you go to the events and then try to find out a little about them and what the connection might be. Carry your business card with you always because you don’t know who you are going to meet when you’re out and about,” said Kelly.

When you do get the opportunity to talk about your company, it’s important to be clear on what you do and know your audience. There are some events to look out for, according to Battersby. “In Dublin there’s the First Friday Brekkie that Niamh Bushnell, start-up commissioner runs. Google attends. Then there’s startupdigest.com where you can choose your location and find events in your area and silicionrepublic.com is another one.”

Ray Byrne is a hotelier, restaurateur and has been in the hospitality business for over 20 years. He is also managing director of Splash Hospitality. He said business is not about business as such, it’s about people. “I would say that networking is my career. I see networking the same as ‘connecting’ with people. When you make a connection with another person, anything is possible in that relationship,” says Byrne.

He advises start-ups to see networking as a “culture” not something on a “to-do” list. “My advice would be to consciously and unconsciously seek to expand your network of contacts every day. Never turn down an opportunity to meet someone new even if it doesn’t appear especially relevant at the time. Networking achieves a ripple effect, it sends out waves and creates a type of perpetual motion to continuously expand your circle of contacts,” says Byrne.

What are the major mistakes start-ups make when it comes to networking? Battersby says that wasting time, not having your “elevator pitch” ready, not doing your research, not having business cards and not following up are things to avoid in making beneficial, supportive, long-lasting networking connections.

“Follow-up, regardless of whether you think you need to follow up, is very important. You never know when you might need to speak to that person or meet that person again. These days an email or LinkedIn is really important just to stay in touch. I think the follow-up, and keeping the relationships alive, is just as important as the networking.”

Battersby says to remember that networking is give and take as you grow. “People in Ireland, I think, are always very generous about saying ‘Well I can’t help you but I can introduce you to a friend or a colleague who might.’ That’s very useful, if you don’t abuse it. There will come a point in time where they’ll need you, you need to give something back.”

You just never know what a cup of coffee might lead to.