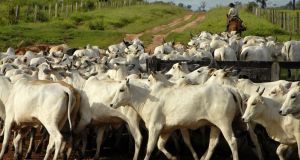 Cattle on a farm in Alta Floresta, Brazil. JBS is the world’s largest meat producer, with annual sales of in the region of $45bn (€40bn).

Brazilian food company JBS, the largest meat producer in the world, has pulled the trigger on a planned overhaul of its corporate structure that will see more than €30 billion worth of its assets shifted to Dublin.

JBS, which last year paid $1.5 billion (€1.35 billion) for Northern Ireland poultry company Moy Park, has in recent days filed documents with the Securities and Exchange Commission (SEC) in New York outlining how it plans to effectively move its parent company to Ireland.

The meat giant, which has annual sales of about $45 billion, in May incorporated a Dublin company, JBS Foods International (JBSFI), which is headquartered at the offices of A&L Goodbody in Dublin’s docklands.

The Brazilian company intends to list the Irish entity on the New York stock exchange. According to the SEC filings, JBSFI will take ownership of all of the assets of the current, Brazilian-listed JBS, with the exception of its domestic beef business and related units, such as a leather tannery.

The domestic beef and leather business will remain in the ownership of the entity that is currently listed in Brazil, which the same shareholders will also own. JBS says the Irish company will then effectively become the “ultimate parent” for the global group, which sells its products in 190 countries worldwide.

The company in recent days has sought the consent of its bondholders for the restructuring. The company says the move will boost its profile with international investors.

Although JBS will then be domiciled in Ireland, it will not be run from this country, similar to the structure of scores of other multinationals, mostly US tech and pharma groups, that have relocated here in tax-driven deals.

JBS says the Irish company will be run from Hertfordshire in England. It is unclear what employment spin offs there might be for Ireland from the move.

The arrival, in balance sheet terms at least, of one of the world’s biggest food companies into the State is, however, likely to skew the official statistics for the Irish food industry.

The Moy Park deal has given JBS a beach head to launch an assault on the European market. It says it generates about 85 per cent of its revenues outside Brazil, and the company has been on a drive to win more international sales in recent years.

The Moy Park deal gives it brands such as Castle Lea and O’Kane as well as the eponymous chicken moniker. In the US, the company operates under the banners of Pilgrim’s Pride, Pierce, Gold Kist Farms and Del Dia and as Beehive in Australia.

JBS has been dragged into a political and business corruption scandal in its home country, which is being investigated by police under the banner of Operation Sepsis. JBS has strongly denied any wrongdoing and says the company is not directly involved in the investigation.

The SEC filings for JBSFI highlight, however, that Joesley Batista, its chairman and brother of the chief executive, has been charged with alleged offences connected with Banco Original, another company connected to the Batista family.