Whiskey a go go: sales top $1bn in US 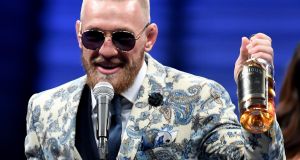 Conor McGregor’s whiskey is posing a challenge to Jameson in the US.

Sales of Irish whiskey in the US rose 12 per cent last year passing the $1 billion milestone for the first time.

However, Jameson, which has led the Irish whiskey renaissance, is seeing a slowdown in growth in the US with analysts attributing it in part to the launch of Conor McGregor’s Proper No Twelve brand last year.

Recent figures from the Distilled Spirits Council show that nearly 4.7 million nine-litre cases of Irish whiskey were sold in the US in 2018 generating $1.01 billion in revenues for distillers. This marks a 9.4 per cent increase versus the prior year and compares with combined sales of just $74 million in 2003.

According to the council’s data, the category has benefited from drinkers’ desire to “trade up” from entry level brands to so-called “high-end premium” and “super premium” products. Indeed, since 2002, high-end premium and super premium whiskey grew 1,106 per cent and 3,385 per cent, respectively.

Jameson remains the top selling Irish whiskey in the US and across the world with sales of 7.3 million cases in the 12 months to the end of June 2018.

The brand has been a star performer for its owner, accounting for more than a quarter of Pernod Ricard’s US sales, and half of the group’s growth.

Recent figures show, however, that while sales remain buoyant, up 12 per cent last year, they are slowing. Edward Mundy, an analyst with Jefferies, attributed this in part to what he described as a “natural slowdown”, but also to the arrival of new market entrants, most notably Proper No Twelve.

Mixed martial arts (MMA) champion Conor McGregor, who is behind the brand, launched Proper No Twelve last September, initially in Ireland and the US. The brand, which is now also available in the UK and Australia, sold out a six-month allocation in its first 10 days and has now shipped about 200,000 nine-litre cases since its launch.

Mr Mundy warned that if Jameson’s growth rate in the US continues to slow due to a jump in sales from Mr McGregor’s brand, it could cause big problems for its owner, which is being targeted by activist investor Elliot.

“The informal ambition is for Pernod Ricard in the US to grow ahead of the market: if Jameson is disrupted by Proper No Twelve, this makes this ambition harder to achieve in the near term,” he said.

Mr McGregor is not the only celebrity to have jumped on board the Irish whiskey bandwagon in recent years. U2 frontman Bono was last year named as an investor in a €50 million whiskey distillery and visitor centre in Monasterevin, Co Kildare being developed by businessman and property investor Paddy McKillen.

10 The Kerryman building for the future in Dubai