Pub chain has sought payment moratorium until its outlets reopen 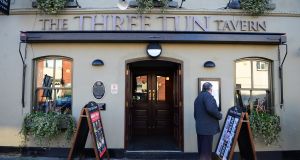 British pub chain JD Wetherspoon has suspended payments to its suppliers in the Republic until its pubs reopen after the coronavirus crisis.

The company confirmed to The Irish Times that, in line with its UK policy, it has sought a moratorium on payments until its outlets reopen.

In an e-mail first reported by UK sustainability website Footprint, the company wrote: “We are asking for a moratorium on payments until the pubs reopen, at which point we intend to clear outstanding payments within a short timeframe.

“We understand that this puts significant pressure on our suppliers, but we are kindly asking for your assistance during this very difficult period,” the email read, according to the report by Footprint.

The British pub chain has one pub in Dublin city centre – the Silver Penny on Abbey Street – and is developing a pub and 89-bedroom hotel in the city, which is set to open this year. It recently acquired HQ Bar and Restaurant at Grand Canal Dock.

It also runs pubs in Dún Laoghaire, Blackrock, Blanchardstown, Swords, Cork and Carlow, and has sites in Waterford and Galway, which are due to be redeveloped.

Separately, the company had come under public pressure in the UK for sending staff home last week, with workers saying would not be paid. However, JD Wetherspoon said on Thursday it would pay all of its 43,000 staff this Friday for the hours they worked last week. – Additional reporting: PA